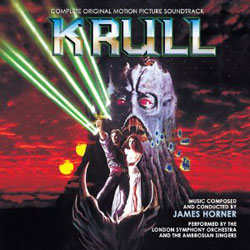 The Black Fortress from the film "Krull" complicates our fear of evil, invading spacecraft. For starters, the ship isn't just hanging out in orbit -- it's here on the planet's surface, looming like a dark mountain on the horizon. And if that weren't bad enough, it teleports to a new location every morning and wants to marry your girlfriend.

That's the problem faced by the film's hero Prince Colwyn, who has to somehow divine the Black Fortress' next location and trek there in time to slay the Beast who rules over it. In the midst of this logistical nightmare, Colwyn also has to contend with the Beast's army of laser-blasting slayers, a shape-shifting assassin and a giant spider.

The protagonists in "Independence Day" and "War of the Worlds" had it easy. Everyone in those films knew where to find the enemy; it was only a matter of figuring out how to defeat them. But thanks to his Black Fortress spacecraft, the Beast is an alien on the run, secretly ruling over his domain and kidnapping princesses without so much as a permanent mailing address.