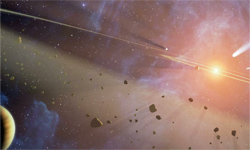 This artist's concept shows the closest known planetary system to our own: Epsilon Eridani. Check out all the rubble.
Image courtesy NASA/JPL-Caltech

As much fun as it is to imagine exploring other worlds spread throughout the galaxy, we all recognize how difficult it will be to travel such incredible distances. So it only makes sense that our first interstellar journeys head toward exoplanets as close to Earth as possible. At only 10 light-years away, Epsilon Eridani b is a great place to start. The only downside to that itinerary is that it's an extremely unlikely candidate for hosting life.

Not only is the planet a gas giant similar to our own Jupiter or Saturn, but it might follow an orbit that brings it close to and far from its parent star. If this is right, it means that even if the planet has terrestrial moons, they likely wouldn't be able to stand the extreme temperature swings that go along with Epsilon Eridani b's eccentric orbit. But some scientists argue the planet has a more regular, circular orbit instead, which makes the faraway system appear more like our own -- asteroid belt and all [source: NASA].

Actually, Epsilon Eridani is surrounded by two asteroid belts -- a possible sign that other, more Earth-like planets could be nearby on the inside of that belt, just like Earth is in our solar system.