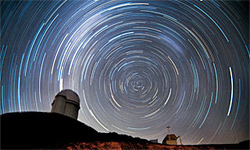 In order to study exoplanets, astronomers have had to be quite inventive. Exoplanets are simply too small, dark and distant for our telescopes to view them directly, so astronomers have found ways to observe their effect on other stars. For instance, to detect the super-Earth HD 40307 b, scientists at the La Silla Observatory of Chile observed the "wobble" that the planet caused in the star it orbits. This common method in the planet-hunting world, called radial velocity, requires extremely precise measurements to detect a planet's gravitational pull on a nearby star.

But while the method can verify a planet's existence, it leaves us with a lot of questions. For instance, although astronomers can calculate HD 40307 b's mass -- about 4.2 times the size of Earth -- they aren't certain whether HD 40307 b is gaseous or rocky [source: Barnes et al.].

Why would we even bring up the planet if we know so little about it? For one thing, at 41 light-years away, it's much closer to Earth than most exoplanets [source: Barnes et al.]. For another, two other super-Earths are in the same solar system, giving us plenty to explore once we arrive.