by Robert Lamb
Prev NEXT
10 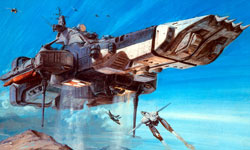 All this AND it transforms into a robot.
Image ©Harmony Gold USA, Inc.

Humans are amazing creatures, capable of achieving just about anything we set our minds to. The thing is, we tend to blow our limitless potential on foreign wars and new episodes of "Fear Factor" instead of scientific advancement. Sure, space colonization might ensure the long-term survival of the human race, but we'd far rather watch game show contestants drink donkey semen on network TV.

What if we could just steal spacefaring technology instead of developing it ourselves? That's what makes the SDF-1 Macross from the "Robotech" anime series so appealing. This massive alien battle fortress mysteriously crashed in the South Pacific and, since no one immediately reported it missing, humans spent close to a decade stripping it down like a stolen Honda Civic in a New Jersey chop shop.

Of course, the evil, alien Zentraedi fleets eventually came to look for it, but by then we'd benefited from the stolen science and learned to use the SDF-1 Macross as our own planetary defense system.