by Robert Lamb
Prev NEXT
8 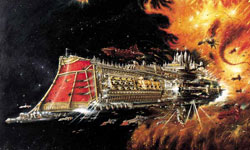 A battleship emerges from the Immaterium.
Image by John Blanche/Games Workshop

Space exploration is costly, but economic gain isn't the only motivator for human megaprojects. Just consider the pyramid tombs of Egypt or China's vast defensive wall. According to astrophysicist Neil deGrasse Tyson, war and devotion to divine royalty could also push humanity out into the void [source: Tyson].

So clearly, this Imperial Emperor-class Battleship from the "Warhammer 40,000" universe is exactly what we need. The dark fantasy gaming world exists in a distant future consumed by total war. The human race battles endlessly for its very survival against enemies both alien and heretical.

The result? Well, on one hand, you wind up with a universe of constant, horrific bloodshed. But the upside is that survivalist fear and devotion to a godlike emperor pumps tons of time and energy into spacefaring technology, producing an entire Imperial Navy of gothic vessels such as this one.

Did I mention that it travels faster than light by dipping through an alternate dimension of demonic chaos? Yeah, there's always a downside.