by Susan L. Nasr
Prev NEXT
9 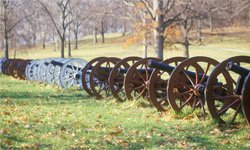 Cannons, like these at Revolutionary War National Park, probably wouldn't be around without gunpowder.
VisionsofAmerica/Joe Sohm/­Getty Images

­Gunpowder exploded into history around 800 A.D. The Chinese accidentally invented it while trying to mix immortality elixirs. Over 400 years, the Chinese made early versions of every gunpowder weapon to exist, including bombs, guns and a type of cannon called "the flying-cloud thunderclap eruptor" [source: Ponting]. The Chinese government tried to keep gunpowder a secret, but it leaked to groups that attacked China and eventually the knowledge traveled across trade routes.

Once prevalent, gunpowder allowed civilized peoples in Europe and Asia to dominate over barbarians. It also ended the longest empire in history. Thanks to its capital city of Constantinople, the Byzantine empire was unstoppable. Constantinople's three layers of walls made it the most fortified city in history. No siege equipment in the world -- no ladders or battering rams -- could break in. But the Ottoman Turks, led by Mehmed II, wheeled 26-foot (8-meter) cannons to the walls, and using gunpowder, shot massive balls that demolished them. With that, the Byzantine empire and medieval warfare ended, since no castle or lance-bearing knight could withstand the force of gunpowder weapons.

In essence, armies acquired gunpowder before they acquired good aim. See what we mean next.