by Susan L. Nasr
Prev NEXT
6 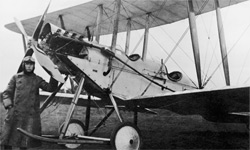 A pilot stands next to his De Havilland BE2, an early bomb carrier, in 1914. A small number of bombs would be released from the plane by hand.
Hulton Archive/­Getty Images

­Airplanes brought war into the skies.

Italy was the first to use airplanes for military purposes. While fighting Turkey for control of ibya in 1911, Italians sent airplanes to find, photograph and bomb Turkish targets [source: Kinney]. By World War I, Germany, Austria, Hungary, France and Britain had air forces hundreds of planes strong. First, countries just sent planes to spy on their enemies. Next they launched fighter planes to shoot down the spy planes. Finally, bomber planes were used to hit cities and troops.

Airplanes changed war by offering an alternative to land or sea invasion, so that fewer soldiers would occupy the battlefield and be at risk. But airplanes also endangered civilians, says historian Roland.

During World War II, both the military convenience and danger of air attacks became clear. To force Japan to surrender while avoiding a land invasion, the United States struck the main island by air. The first bombs hit industrial targets and did little damage. The United States then firebombed Tokyo, killing 80,000 residents and leaving 1 million homeless [source: Britannica]. Airplanes then dropped atomic bombs that killed more than 100,000 civilians and injured many thousands more.

"The early theorists of airpower thought that if civilian populations were subjected to bombing attacks, they would sue for peace. It turns out that didn't happen. The result is that airpower spread warfare to the civilian population without being decisive. It's not a happy story," says Roland.

Our next technology carries messages, not bombs, through the air.