by Susan L. Nasr
Prev NEXT
5 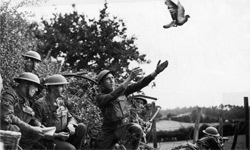 Before radio, soldiers trained carrier pigeons to deliver messages during wartime. This photo was taken during World War I.
FPG/Hulton Archive/­Getty Images

­Don't get us wrong. Before radio, commanders could control big armies. They used runners, riders, flags and even pigeons to communicate, but just ask Napoleon how hard it was. In the battle of Jena against Prussia, he tried to manage more than 100,000 soldiers -- about the limit in his time -- and he forgot about some troops [source: Britannica].

"As armies grew larger, the need for communication to maneuver them in the field became more important," says Roland. "Radio meant that a commander could be in instant contact with all of his subcommanders and organizations."

Navies used wireless telegraphs, the first military radios, during World War I [source: Britannica]. These machines beamed messages from land stations to sea, without the need for wire, but enemies readily intercepted the messages and cracked the codes.

By World War II, short-wave radios in airplanes, tanks, and ships helped these forces communicate over some 150 miles (241 kilometers). [source: Roland]. The Germans used the communications link with great success in their "blitzkrieg" technique. In this technique, tanks and airplanes performed a battlefield ballet; as airplanes provided cover, tanks broke through enemy lines. To coordinate the movement, pilots and soldiers talked by radio. Using blitzkrieg, the Germans blazed through the Netherlands, Belgium and much of France in 10 days [source: Parker].

For more on waging war with waves sent across the sky, read about our next technology.