by Susan L. Nasr
Prev NEXT
4 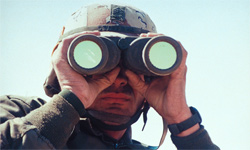 Even with radar, a pair of binoculars still comes in handy for this U.S. soldier during the Gulf War.
Steve Elfers/DOD/Time Life Pictures/­Getty Images

­Radar changed both offense and defense in war. It was the first automated way to see the enemy, but also to be seen. As late as World War I, watching for the enemy meant stationing a man in the field with field glasses and telling him to phone the commander when he saw a plane. Forget that on a cloudy day.

In 1935, a scientific paper explained radar, a method for spotting the enemy by bouncing radio waves or microwaves off solid objects. By 1939, Britain had built the first radar system. It planted 350-foot (107-meter) radar towers around the island to watch the skies [source: Boot]. During the Battle of Britain in 1940, the towers saved Britain. As German planes swooped in to bomb the island, the towers relayed warnings to the British air command, which speedily sent planes to shoot down the attackers.

Radar also changed war at sea. During World War II, German submarines torpedoed British and American ships as they crossed the Atlantic. But airplanes, once outfitted with microwave radar, trumped the subs. The Allies sent airplanes to detect the subs when they surfaced and drop underwater bombs.

Because radar enhanced commanders' ability to see, everyone had to work harder to stay out of sight. The British began shooting metal strips, called chaff, out of its planes to obscure radar's view [source: Boot].

Neither radar nor anything else packs the wallop of our next military technology.