by Susan L. Nasr
Prev NEXT
3 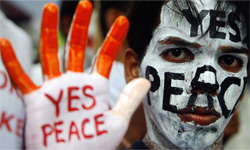 Students take part in a peace rally in Mumbai on Aug. 6, 2007, to mourn victims of the atomic bombing of Hiroshima in 1945.
Sajjad Hussain/AFP/Getty Images

­For centuries, military theorists talked about fi­nding a weapon so horrible, no one would use it. "Most weapons people thought would be in that category just made war more horrible," says historian Roland. "Nuclear weapons are the first that everybody agrees we can't use."

Nuclear weapons were used on people just twice. In 1945, the United States dropped two atomic bombs on Japan at the end of World War II. The "Little Boy" bomb carried fissionable uranium, and the reaction of just a fraction of it sent a shock wave, fireball and radiation across Hiroshima, killing 90,000 people. The "Fat Man" bomb carried fissionable plutonium, and its explosion immediately killed 35,000 people in Nagasaki.

Even as world powers built stockpiles of nuclear weapons and executed numerous tests, knowledge of the devastation in Japan has deterred their use.

"We haven't had any great power war since 1945, and it's because of nuclear weapons," says Roland. "They have made for a much more peaceful world."

Peaceful, of course, is a relative term. Numerous wars have torn apart countries since 1945, but none so far on the scale of either of the first two world wars.

If you prefer eavesdropping to bomb-dropping, read on.