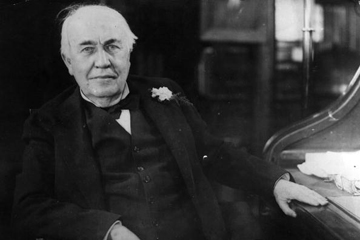 Thomas Edison invented some of our most notable technologies. His work inspired the annual Edison Awards.
Hulton Archive/Getty Images

American inventors have created some of the most important technological breakthroughs in the history of humankind. The telegraph, light bulb, artificial heart and sewing machine all were products of American minds. Americans also created box telephones, computers, the Internet, airplanes and the polio vaccine.

In 1987, the American Marketing Association started the Edison Awards to encourage and recognize inventors. Each year, the Edison Awards honor select individuals and organizations for their contributions to product innovation and economic development.

There are three types of Edison Awards. They include awards for achievement, best products and ecologically-sustainable business ideas.

The Edison Achievement Award goes to a business executive who stresses progress in product innovations, and the Green Award is presented to organizations that stress ecologically sound products. These companies recognize the importance of sustainable products and manufacturing processes.

The Edison Best New Product Award is self-explanatory, and is awarded in several categories, including science and medical, electronics and medical, energy and sustainability, technology, transportation and industrial design. Other categories include lifestyle and social impact, living and working environments, media and communications, and consumer packaged goods.

Some of the most recognizable winners of the 2009 Edison Awards include the Apple iPhone, Wii Fit and MacBook Air. In the transportation category, Trek scored with its Madone 5.2 bicycle. In science and medical, the OmniPod insulin delivery system took the gold.

Not many products win Edison Awards, so these prizes go only to individuals and companies with significant accomplishments. Keep reading to see 10 products, listed in no particular order, that were nominated for the 2010 Edison Awards. 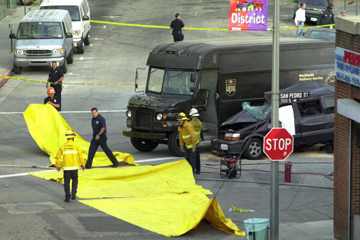 The stolen vehicle assistance system uses OnStar's existing technology infrastructure, which includes GPS, vehicle telemetry and cellular communications. If someone swipes your car, you notify the police, who work with OnStar to ascertain the vehicle's location.

Once the cops have your car in sight and are sure that there are no bystanders who might be harmed, they can request that OnStar remotely shut down the car by putting it into idle. Steering and braking controls will still work, but the thief will be unable to accelerate or otherwise attempt a perilous high-speed getaway.

The system could drastically reduce the numbers of chases that occur, saving lives and property. And you might just get your car back in one piece, too. The catch? You have to be a full subscriber to the stolen vehicle assistance service, or OnStar can't help you. 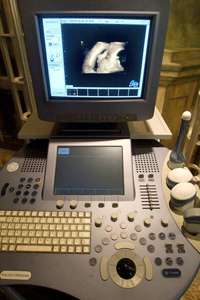 GE's portable ultrasound equipment can be taken to the patient, rather than the other way around.
Mario Tama/Getty Images

It used to be that in order to receive an ultrasound, you had to visit a doctor who had the space and money to afford these large, expensive machines. Now, thanks in part to GE and its Voluson ultrasound technology, professionals can perform an ultrasound procedure almost anywhere.

The Voluson e is a compact ultrasound that's designed for specialties such as gynecology, delivery and other obstetrics-related purposes. And unlike traditional ultrasounds, this one is totally portable -- it's so small and light that one person can hand carry it wherever he or she needs to go.

That means a medical professional can view the Voluson's 2-D and 3-D images just about anywhere. The end result is faster diagnoses and treatments, and better overall health care. 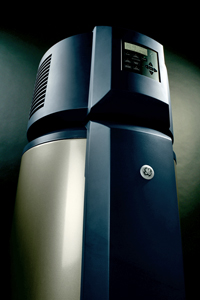 The GeoSpring hybrid water heater promises to save customers a lot of energy.
Courtesy GE

GE's GeoSpring hybrid is an advanced water heater that's designed to provide homeowners with massive reductions in water heating bills. GE says that the GeoSpring is a result of totally rethinking the concept of water heating and features major redesigns in most aspects of its construction.

The GeoSpring was designed for maximum efficiency, and as such, it's the first heat pump water heater to receive an Energy Star rating. It uses a different heating process than traditional water heaters. GE built an evaporator and compressor into the electric water heater -- the evaporator draws in heat using fans, and condenser coils transfer heat into the tanks, which warms the water inside.

GE is confident that homeowners will see significant decreases in their heating costs. The company claims some users will see heating expenditures drop by more than 60 percent, which could save hundreds of dollars in a single year. 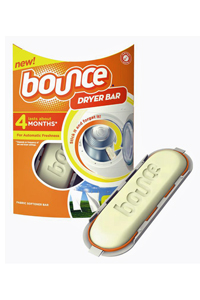 Dryer sheets can be a huge hassle, especially for busy families who use their dryers on a daily basis. Without fail, the box of dryer sheets winds up empty (and of course, there's never a backup box) or the sheets themselves intertwine with your clothes, falling out at inopportune, public moments. If you've ever suffered these indignities, the Bounce Dryer Bar may be your new best laundry friend.

You install this bar inside your dryer, where it remains for two to four months. As your clothes dry, they rub against the bar, which reduces static buildup and adds a fresh scent. As the bar wears down, you'll see the word "replace" appear, which indicates that you'll need to buy a new bar.

Although the cost savings isn't necessarily a compelling reason to buy the Bounce Dryer Bar, convenience is a primary selling point. You won't have to worry nearly as much about the dwindling dryer sheet supply or sheets that appear randomly in your clothes, either. 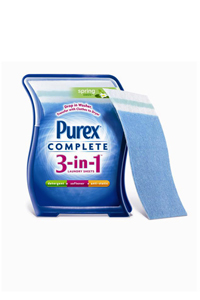 If you're tired of messing with various laundry soaps and chemicals, the 3-in-1 product from Purex may help.
Courtesy Henkel

To the uninitiated, home laundry processes might seem like a strange chemistry experiment. There are random soaps, bleaches, softeners and other chemicals that must be used at specific times to produce desired results. But Purex introduced a new laundry concept with its 3-in-1 Laundry Sheets.

A single all-in-one sheet contains enough detergent, softener and anti-static chemicals for one load of laundry. When you drop the sheet into your washer, it releases detergent designed to help clean your clothes, while another ingredient softens materials.

When you transfer your clothes to the dryer, the sheet goes with them. Your dryer's heat output activates the sheet's anti-static properties, reducing cling. If you're tired of messing with detergents while doing laundry, or just sick of carrying bottles to the laundromat, these sheets may be a good investment. 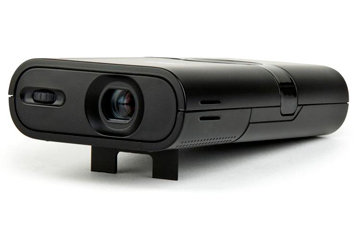 3M's Pocket Projector lets you project presentations without the use of a computer.
Courtesy 3M

Not long ago, a state-of-the-art business road warrior shared portable presentations using heavy laptop computers, an even bigger projector and a tangle of required cables and power cords. No more. 3M recently introduced an updated version of its Pocket Projector, the MPRO 150, which makes on-the-go presentations much simpler.

The MPRO 150 is small enough to fit in a side pocket of your briefcase, but it comes with 1GB of internal memory, a memory card slot and the ability to open and project Microsoft Office and Adobe PDF files. You don't even need a computer to run your presentation -- you can simply transfer files directly from your iPod, smartphone or other storage device, point the projector at a wall and get to work. 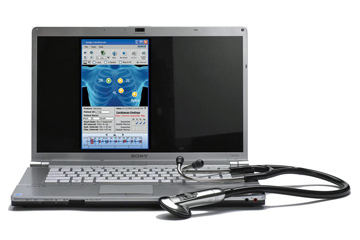 The most recognizable form of the stethoscope has been dangling from doctors' necks since the 1940s. That analog device helps physicians monitor sounds, such as your heartbeat, to gauge your health. With the Model 3200 electronic stethoscope, though, this old-school medical tool is getting a serious upgrade.

The Model 3200 is equipped with ambient noise reduction technology, which means it filters out unrelated background noise to help doctors focus on sounds that matter most. It also has extra amplification when needed. And that's just for starters.

With this product, doctors can even record sounds and listen to them again later in an effort to create a more accurate diagnosis. Integrated Bluetooth means sound data can be transferred immediately to a computer and stored with a patient's medical file and shared online with specialists. 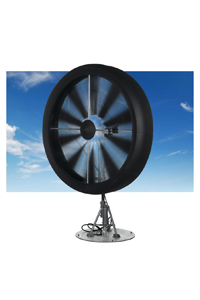 The popularity of sustainable energy production is growing, and there are ever more products targeting small businesses and homeowners. WindTronics recently introduced the Honeywell Wind Turbine, which is about 6 feet (1.8 meters) wide and generates electricity in winds from as slow as 2 mph (3.2 kilometers per hour) to as fast as 45 mph (72.4 kilometers per hour).

Unlike traditional turbines, the Honeywell design omits a central gear and rotor, which cuts down on parts that can wear out or steal energy that should go towards electricity production. Also, its design creates energy at the tips of the blades, which is where the blades spin fastest. They'll begin turning in winds of just 1 mph (1.6 kilometers per hour), and begin generating energy at 2 mph, far slower wind speeds than most turbines require.

You'll need a professional installer if you want one of these turbines for your home. And although you'll spend thousands of dollars just to get started, federal, state or local incentives may reimburse you for a huge percentage of the expense. 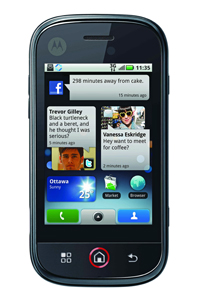 Motoblur is a mobile interface that may change the way we control smartphones and similar devices.
Courtesy Motorola

Smartphones are great for accessing all of the social networking sites you visit on your desktop computer. However, smartphone operating systems often complicate login processes, and jumping from app to app gets frustrating, too. Enter Motorola's Motoblur user interface.

Motoblur shifts the concept of user interfaces that are usually built into portable electronics. Instead of forcing you to open apps individually to check messages and posts, Motoblur automatically sends updates that you can check instantly. Basically, you receive a feed that's constantly updated with new e-mails, posts from social networking sites such as Facebook and Twitter, contacts and all of your other favorite aspects of the Web, too.

What's more, all of the information from that feed is backed up to a Motorola server. So if you lose your phone, you won't lose the vital data that's on it. 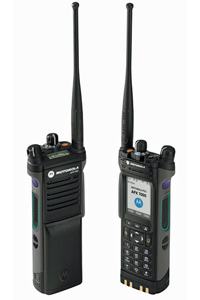 Motorola's new APX multi-band radios are actually two radios in one. They allow for multi-band operation in any two bands, including 700 and 800 MHz, as well as VHF and UHF R1. That means that when disaster strikes, first responders from a wide variety of agencies can communicate and coordinate in real time.

Without an APX radio, some first responders must carry more than one radio, or rely on information from dispatchers before proceeding with vital response activities. When they're equipped with these Motorola radios, however, each agency can deploy its resources more quickly, and with less conflict. The radios are the first multi-band products to adhere to Project 25 standards, a set of rules set forth by the Telecommunications Industry Association in an effort to streamline public safety communications.

For more information on cutting-edge products, award some time to the links on the next page. 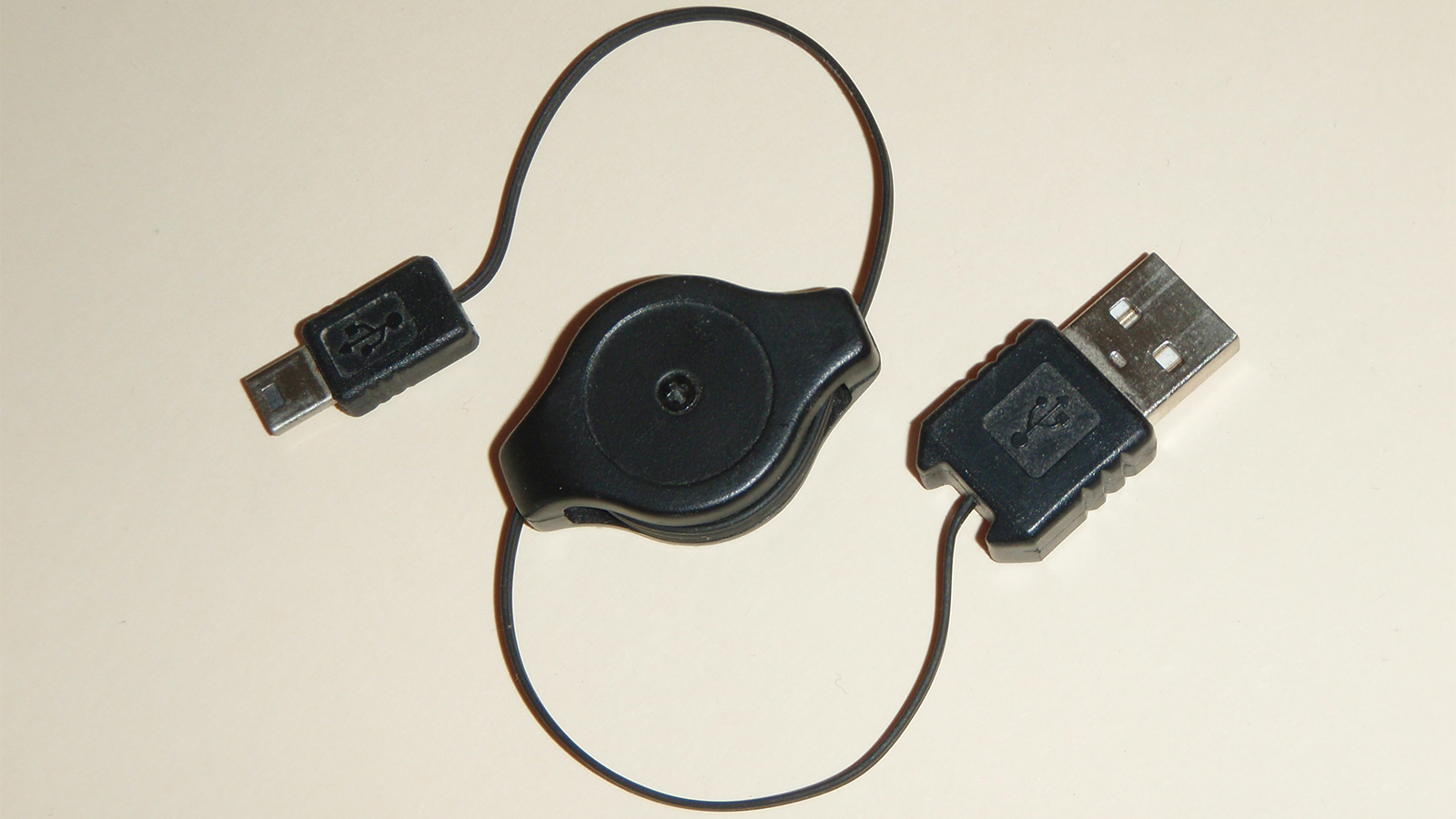