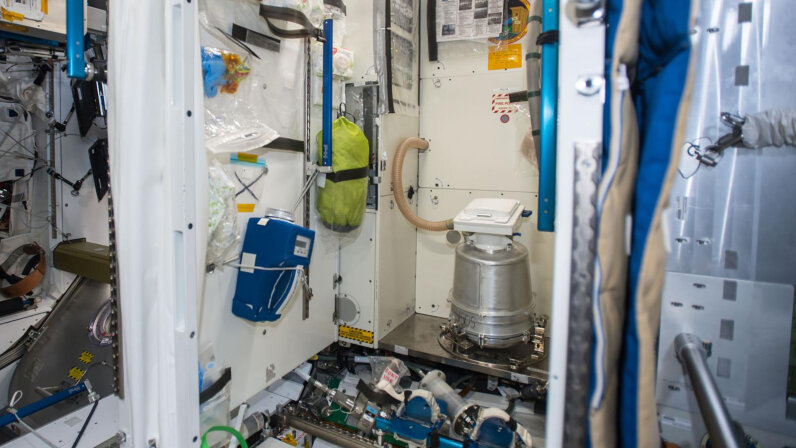 The 'bathroom' on the International Space Station doesn't exactly present the astronauts with a spa-like environment, but it gets the job done in a safe and healthy environment. NASA

Even when you're millions of miles from home, you can't escape certain facts of life. When astronauts are orbiting hundreds of miles above Earth's surface, they still have to eat, sleep and go to the bathroom. Of course, the mechanics of using the toilet -- and disposing of the resulting waste -- in zero gravity can get a little tricky.

Since the very earliest space missions, a number of contraptions have helped astronauts relieve themselves more easily. These inventions run the gamut from simple adult diapers to more sophisticated toilet systems that actually can convert urine into drinkable water. Throughout the history of space exploration, spacecraft have come equipped with their own toilets. Despite this, there have been a few hitches over the years -- including broken toilets and disputes over sharing bathrooms -- that have made going to the bathroom in space an adventure in and of itself.

Take a trip down aerospace memory lane and learn about some of the bathroom moments that have given astronauts the greatest relief and aggravation over the years.

Alan B. Shepard, Jr.'s historic first manned American space flight, on May 5, 1961, was only supposed to have lasted 15 minutes. But nature would eventually call after weather and technical difficulties delayed the flight for four hours. Shepard threw in the proverbial towel and radioed to the controllers, "I've got to pee." He was told, "No way." With no other option available, Shepard was forced to go right in his suit.

Once space missions became longer, engineers knew they had to equip spacecraft with real bathroom facilities. To function in a weightless environment, these space toilets came equipped with a lap belt, handholds, and foot restraints to ensure that astronauts didn't float away midstream. Because there's no gravity in space, a fan pulled urine and feces into their respective collection containers. A filter removed any unpleasant odors before the air was returned to the cabin. 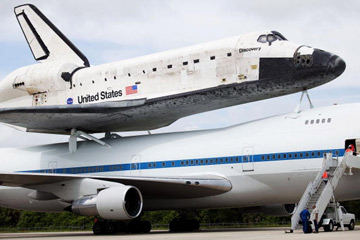 During a 1984 mission on the space shuttle Discovery, the aircraft's waste water venting system failed, leading to the formation of a very large icicle made of urine on the outside of the shuttle. Realizing that the urine-cicle could break free during re-entry and damage the protective heat tiles on the shuttle, the crew used the shuttle's robot arm to break it off. The tiles were saved, but the crew had no choice but to shut the urine collection system down. The crisis was averted, but the problem left the crew without a working toilet for the rest of the six-day mission.

Leave it to Japanese engineers to bring space toilets into the 21st century.

The Japan Aerospace Exploration Agency (JAXA) has reportedly developed a toilet that works a lot like a high-tech diaper. If this toilet catches on, astronauts will never have to take a bathroom break — because they'll carry it with them at all times. The toilet contains motion sensors that can detect when the astronaut goes to the bathroom and automatically triggers a suction unit that draws wastes away. Once the astronaut's done doing his or her business, the machine washes and dries the wearer. It also removes any unpleasant sounds and odors, so an astronaut can go to the bathroom in close quarters without the knowledge of anyone nearby.

JAXA plans to test a prototype of the device in Japan's Kibo lab on the International Space Station.

Living on the International Space Station must be a lot like being part of a big family — everyone's always fighting over the bathrooms. In 2009, cosmonaut Gennady Padalka took that universal struggle to new heights when he complained to a Russian newspaper that he wasn't allowed to use the bathroom on the American side of the Space Station [source: BBC News].

No, the Americans weren't re-enacting the Cold War in space: As it turned out, Padalka actually blamed the closed bathroom door on the Russian government, which had started charging NASA for resources used by American astronauts in 2003. The United States reciprocated by asking the Russians to keep out of its facilities.

Padalka told the newspaper that the bathroom shutout was having a real effect on his cosmonauts' morale. Banishment from the Americans' exercise bike didn't help lift their spirits, either.

It's in the Bag

NASA's Apollo program landed the first men on the moon, but its missions had at least one serious design flaw. When the astronauts had to go to the bathroom, they were forced to place a condom-like outfit over their most sensitive parts. The fitting attached to a hose that released urine out the side of the spacecraft.

The device was decidedly low-tech and could be downright painful. If the astronauts opened the valve too soon before starting to urinate, the suction would pull their genitalia right into the hose. Once the astronauts began to urinate, the fitting would often pop off, releasing a spray of urine into the spacecraft. Considering the effects of zero gravity, it was a less-than-pleasant experience for all on board.

That experience was nothing compared to the ordeal of weightless defecation. Astronauts had to tape a bag to his or her rear end; once the astronaut started going, he had to reach into the bag and grab whatever came out (there's no gravity up there to do the work), open up a capsule of blue germicide and mush everything together. Crew members on the Apollo 7 mission wrote of the experience, "Get naked, allow an hour, have plenty of tissues ready" [source: Saunders]. 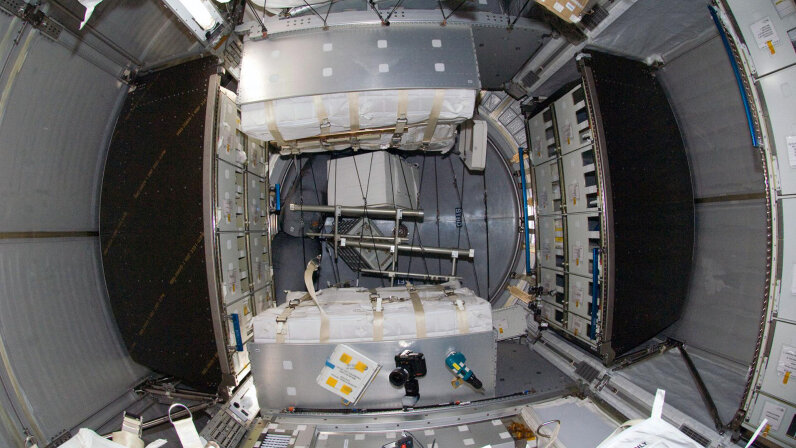 The Leonardo Multi-Purpose Logistics Module, which turns urine into potable water, was moved from Space Shuttle Endeavour to the International Space Station in 2008. NASA

We've heard stories about some of the more ridiculous expenditures made by the U.S. government, but the 2008 announcement that NASA planned to invest $250 million in a space toilet was exorbitant, even by Uncle Sam's standards. Despite its price tag, the toilet isn't made of solid gold, but it does have one pretty fancy feature — it can turn urine into drinking water.

The pricey water processor not only filters urine into water, but it also makes sweat and moisture from hanging wet towels potable. For those who scoff at the idea of drinking urine (even if it's purified), NASA officials say the converted water is cleaner than the tap water in the United States. They also say this device should conserve 7 tons of water each year. 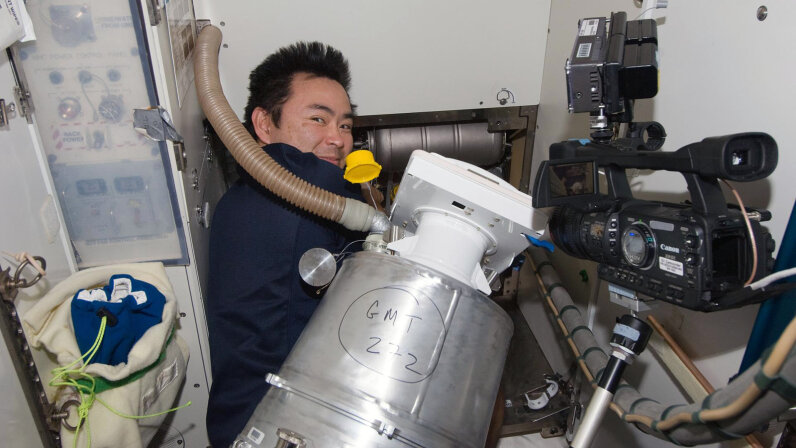 When a toilet breaks on Earth, you call a plumber. But when a $19 million commode goes on the fritz in space, fixing it isn't as easy. In July 2009, one of the toilets on the International Space Station broke when its pump separator flooded, forcing the six station crew members and seven visiting astronauts from the space shuttle Endeavour to share the one remaining toilet on the American side — or ask permission to use the toilet on the Russian side of the space station.

At least the astronauts had other working facilities available: A year earlier, the Space Station was equipped with only one toilet. When that lone toilet's motor fan broke, the crew was left crossing their fingers — and legs. Fortunately in both cases, the crew was able to perform some emergency plumbing and they quickly got the broken toilet back up and running again. 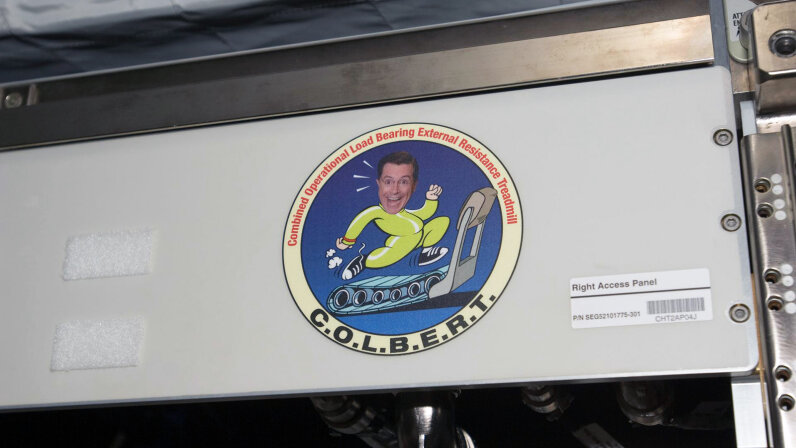 In early 2009, when NASA was looking for a name to grace its newest space module, the U.S. space agency challenged Americans to come up with the perfect moniker. Never one to miss out on an opportunity for self-promotion, comedian Stephen Colbert urged viewers of his show "The Colbert Report" to enter his name through a write-in option. Colbert won by a landslide, capturing 230,000 votes. Despite the runaway victory, NASA hedged and named its module after the eighth runner-up, "Tranquility."

As a consolation prize, the space agency considered naming a commode in Colbert's honor. In the end, the host's name ended up gracing a treadmill (in an acronym for the Combined Operational Load Bearing External Resistance Treadmill), which prompted the comedian to respond, "I couldn't be prouder that my treadmill will soon be installed on the International Space Station to help finally slim down all those chubby astronauts" [source: YouTube].

The timing isn't always right when an astronaut's got to go. During takeoffs and landings, or on spacewalks, astronauts will often wear a Maximum Absorption Garment (MAG) in case they have to use the bathroom.

In 2004, one astronaut thought she'd use the same product for a different purpose. After Lisa Nowak found herself challenged for the affections of fellow astronaut Bill Oefelein, she decided to drive some 963 miles (1,549 kilometers) from Houston, Texas to Orlando, Florida, to confront Oefelein's girlfriend and romantic rival, Colleen Shipman. When police pulled Nowak over after the confrontation, they found a wig, a plastic BB pistol, a folding knife — and a few of the high-tech diapers. Nowak said she had brought them along to avoid having to stop for bathroom breaks during her stalking expedition, but denied ever using them at trial. In a bizarre twist to an already peculiar story, one of Nowak's diapers reportedly ended up for auction on eBay, with a starting bid of $2,000.

In the fall of 2009, a few stargazers were surprised to learn that what they thought was a magnificent celestial phenomenon was nothing more than an outer space urine dump. Space shuttles only have a limited amount of room aboard, so astronauts regularly have to lighten their load by releasing their waste products. When urine is released out in space, it instantly freezes into a cloud of ice crystals. The sight of the sun hitting those droplets and transforming them into water vapor is quite astounding, according to some observers.

Apollo 9 astronaut Russell Schweickart once said, "The most beautiful sight in orbit ... is a urine dump at sunset" [source: Time]. As the urine hits the exit nozzle, it "instantly flashes into 10 million little ice crystals which go out almost in a hemisphere ... a spray of sparklers, almost." This particular dump in 2009 was unusually large — about 150 pounds (68 kilograms) of urine and water, according to NASA, because the shuttle couldn't unload during its 10-day visit to the International Space Station [source: Space.com]. 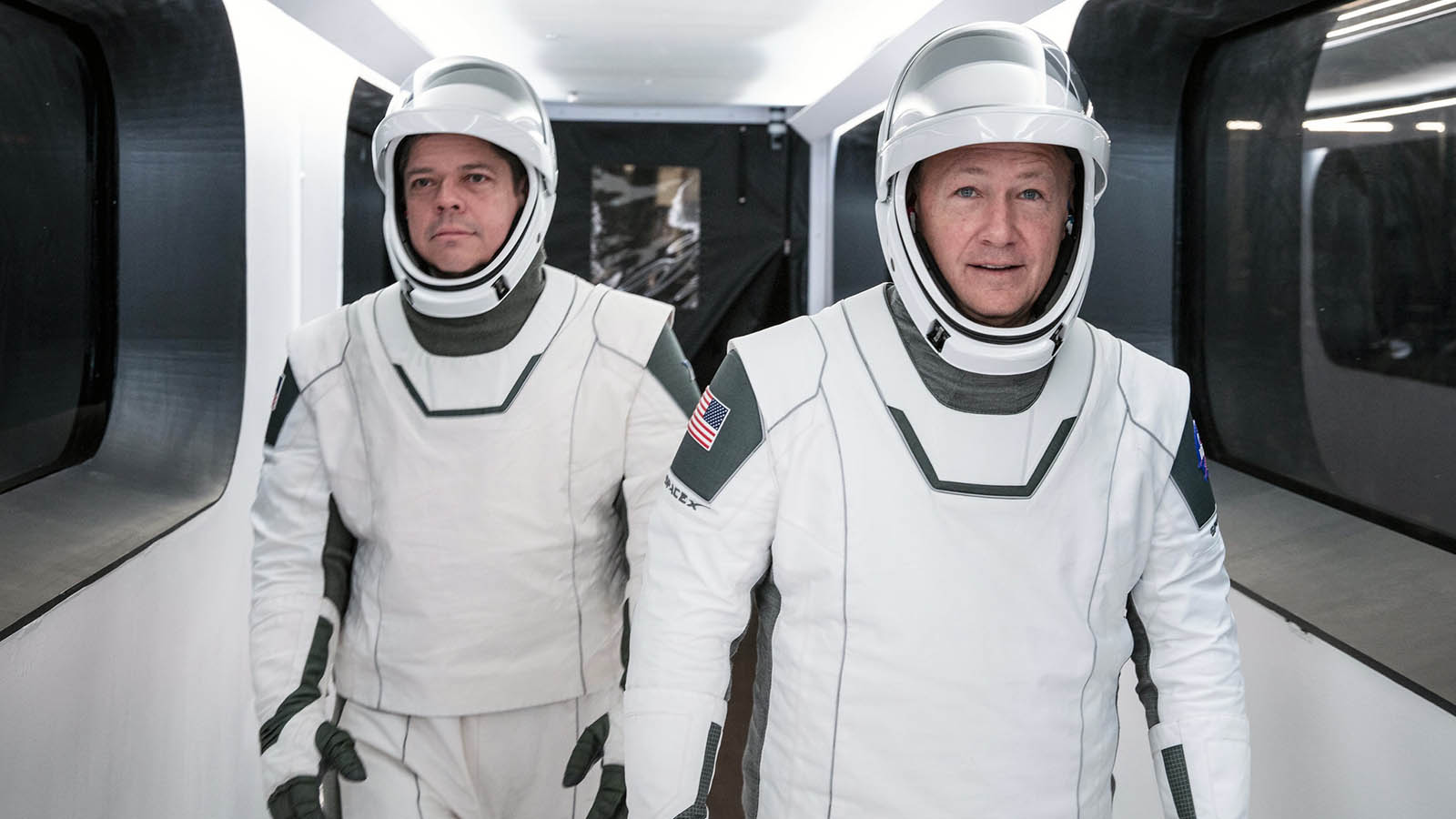