by Robert Lamb
Prev NEXT
10

Way Down in the Hole 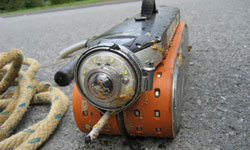 You don't like to think about it, I know, but all those toilets and drains in your life are just gateways to another world -- a dark, stench-choked realm where rivers of human waste traverse thousands of miles' worth of pipes.

But the pipe world isn't perfect. Lines break. Caked-on fats and oils steadily clog up the works. In the old days, human waste department workers had to dig up the affected pipe sections and diagnose the problem firsthand -- a task as expensive and time-consuming as it is gross.

That's where this guy comes in. Meet the Redzone Solo, a pint-sized sewer tank with a knack for navigating 8-12 inch (200-300 millimeter) diameter pipes. Old Solo works alongside a bunch of humans who send him down manholes to explore with his 360-degree digital vision, GPS and onboard intelligence for autonomous operation.