Mermaid in Your Manhole 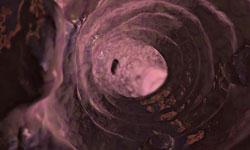 The next robot we're gonna meet truly is a little guy -- and believe me, that's a good thing. His creators at Japan's Ryukoku University and Osaka Medical College call him "The Mermaid," and he's programmed to swim up your butt.

The 2-inch (4.5-centimeter) long Mermaid (who looks more like a tadpole) is the world's first self-propelled endoscopy device, meaning he's designed to swim through a patient's digestive track and take photos along the way -- a task that aids doctors immensely in diagnosing everything from stomach ulcers to colon cancer.

He's no weakling either! While other endoscopic capsules depend on the patient's natural muscle contractions to move around in your intestines, the Mermaid uses motorized propulsion to swim around inside you. He can enter your digestive track at either end and can speed through the entire works in just a few hours -- as opposed to the 24-72 hours it takes a corned beef sandwich to travel the same road.

Normally, a doctor controls the Mermaid with a remote-control joystick, but right now he's just chilling in his favorite bar with his fellow hard-working robots.

You're going to love this next robot. He's an artist.