The Artist as a Young Cloaca 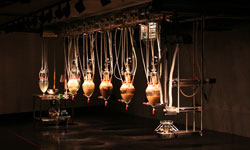 No offense, but this bot's "dirty job" is something you do every day of your life: He turns food into poop. Meet Cloaca, the digestion machine that does his business in some of the modern art world's finest galleries.

As you can see, Cloaca consists of six glass vats connected to each other with a system of tubes, pumps and wires. A hired chef feeds gourmet meals to one end of the mechanical installation, which blends it into a fine paste. Next, this pureed foodstuff travels through a series of acid and enzyme treatments that mimic the chemical digestion process of the human body. Finally, Cloaca excretes a dark, odorous lump of fecal-like matter onto a rotating tray.

It may all seem like pure nightmare fuel, but Cloaca (Latin for "sewer" and the preferred term for a bird's posterior orifice) is the dream child of Belgian conceptual artist Wim Delvoye. The original robot troubled some art lovers at Belgium's Museum of Contemporary Art in Antwerp back in 2000, but Delvoye has since created several siblings for the infamous poop machine -- including a vertical model complete with a conveyor belt at the end.

Don't think of Cloaca as a nightmare but rather the realization of a dream. Sure, he's a tad gross, but humans have dreamed of pooping automatons since the 18th century [source: Wood]. Plus, the work continues at Bristol Robotics Laboratory's EcoBot program, where researchers develop robots capable of not only digesting organic matter, but also producing energy from the act.

Enough about Cloaca -- let's move on before "nature" calls again.