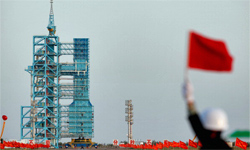 Since kicking off in 1992, China's space program has chalked up modest but steady progress, roughly paralleling the trajectory of the American and the Soviet programs in the 1960s but at a steeper approach. Where its precursors were forced to blast off on the back of primitive computers and solid-state technology, China stands elevated on the shoulders of giants, benefiting from four decades of technical innovation and lessons learned by other space programs.

On Dec. 29, 2011, the communist state announced its next five-year road map for advancing Chinese space exploration, a plan that comprises bigger and better rockets, solo space station status and lunar launches preparing the way for sending humans to the moon. With the American space program's prospects uncertain, and Russia's 2010 and 2011 spate of launch problems, it appears the stage is set for China to take its place among, if not surpass, the global space powers.

In this article, we'll add up the 10 ways China has signaled the earnestness of its extraterrestrial aspirations.