by Nicholas Gerbis
Prev NEXT
10 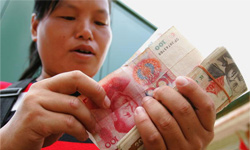 You can't have a space program if you don't have any money. That's not the case for China though.
Guang Niu/Getty Images

China's booming economy fuels its space aspirations, and the nation is banking on the relationship being reciprocal. As the program progresses, it should yield marketable technologies, much as the American space program spawned memory foam, digital image enhancement, better adult diapers and ribbed swimsuits.

Viewed from the standpoint of gross domestic product (the market value of all goods and services produced within a country in a given period), that doesn't amount to much -- a fraction of a portion of a part: 0.02 percent of China's $7.3 trillion GDP in 2004, as compared to 0.14 percent of America's $11.8 trillion GDP that same year [source: Masters].

Still, that apportionment is nothing to sneeze at. China -- with its bargain-basement labor costs and sky-high proportion of state-run enterprises -- can stretch each yuan further than the U.S. can squeeze its dollars and, as we'll see in this next section, it has more than scientific and economic motives for doing so [source: BLS].