by Nicholas Gerbis
Prev NEXT
8 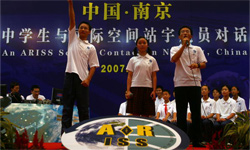 If you want a great space program, you have to get the kids interested. Here, Chinese students talk to astronauts during an ARISS (Amateur Radio on the International Space Station) contact in 2007.
China Photos/Getty Images

For a nation to reach skyward, it must be tended by educated leaders and rooted in a skilled workforce. With this in mind, China is building bridges between its academic, research and space centers. Established affiliations include the following:

The nation has also made headway in building regional cooperation among government officials and management and engineering experts in Asia and the Pacific [source: Zhigang]. In addition, the China National Space Administration reports setting up cooperative agreements with Roscosmos, the Russian space agency, along with Spain's nascent space program. China has also launched a satellite in conjunction with Agência Espacial Brasileira, Brazil's national space agency, and has inked a memorandum of understanding regarding space with Canada.

This underpinning of cooperation extends to childhood education as well. For example, several Chinese students have taken part in Space School China, a program based on Space School UK [source: British Council]. These educational opportunities give young adults ages 13-15 the chance to participate in rocket building, planetary science, robotics and other space-related activities.

Next we'll examine how China is expanding another foundational facet of its space program -- one that literally helps get its rockets off the ground.