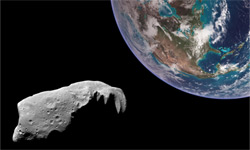 If you were being stalked by a killer, you would you try to stop him or her, right? Now let's say your killer is a space rock shaped like an Idaho spud. What would you do about that? Interestingly enough, the odds of you being murdered at the hands of a madman are about one in 210 [source: Bailey]. The odds of being killed by a cosmic potato are a tad lower -- about one in 200,000 to 700,000 over your lifetime, depending on who's making the calculation [sources: Bailey, Plait]. But here's the rub: No single person -- not even someone as evil as Hitler -- could wipe out the entire human race. An asteroid could. If a rock just 6 miles (10 kilometers) across struck our beautiful, blue world, it would be adiós muchachos for every last one of us [source: Plait].

So, stopping an asteroid from blindsiding Earth makes sense, but is it even possible? And if it's possible, can we afford it? The answer to the first question might surprise you, because there are, in fact, many different ways to thwart a space rock. (No one ever said they were smart.) How much it might cost remains uncertain at best. Money, however, shouldn't be the main concern when you're talking about the survival of the human race. So let's throw that question out the window and focus on the top 10 ways to stop a killer asteroid, no matter how crazy (or costly) they seem on paper.

Up first, we have a solution based on tried-and-true Cold War technology: nuclear weapons.