Throw a Few Photons at the Problem 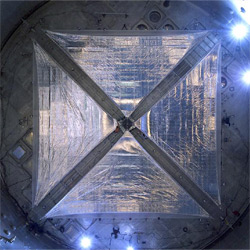 This four-quadrant solar sail system (66 feet on each side!) gets poked and prodded at NASA's Glenn Research Center at Plum Brook Station in 2005.
Image courtesy NASA

Electromagnetic energy produced by the sun applies pressure to any object in the solar system. Astronomers like to call it solar, or radiation, pressure and have long thought this stream of energy could be a source of propulsion for rockets. Just strap some sails onto a spacecraft, let them catch a few rays and the ingenious vessel will slowly, gradually, pick up speed as incoming photons transfer their momentum to the sail. Could something similar work on an asteroid? A couple of scientists think so. Assuming you had some time -- we're talking decades here -- you could fasten some solar sails on an asteroid, do a little tacking and steer the rock away from Earth.

Of course, even Bruce Willis might not be extreme enough to land on a hunk of rock and try to convert it into a cosmic sailboat. Another option would be to wrap the asteroid in foil or coat it with highly reflective paint. Either solution would have the same effect as a solar sail, harnessing the energy of incoming photons. Then again, who's going to try to wrap foil around a giant potato traveling, say, at 16 miles (25 kilometers) per second [source: Jessa]? Or carry a few million gallons of paint into space?

Luckily, there's another sun-centered solution that might not seem so wacky.