Turn the Rock Into a Puffball 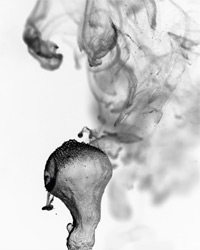 A smoking mushroom, a concept that proves oddly handy in space, too
Hemera/Thinkstock

You're familiar with puffballs, right? They're the little round mushrooms we often see in fields and forests that reproduce by releasing spores through a topside exit hole. Poke a fresh puffball, and you'll see black smoke shoot out in a jet.

Strangely enough, astronomers think they can get an asteroid to do the same thing, though not by poking it. Instead, they envision parking an unmanned probe in orbit around an offending rock, then aiming a laser at the object's surface. As the laser heats up the rocky substrate, steam and other gases will erupt in fast-moving jets. According to Newton's laws of motion, each burst of gas applies a tiny force in the opposite direction. Heat the asteroid long enough, and you'll have it hissing like a teakettle and moving, centimeter by centimeter, off its original course.

Some see the laser as the limiting factor in this scenario. What if it can't draw enough power to sustain long-term heating? You could arm the probe with an array of mirrors. Once you get the spacecraft in orbit around the asteroid, you simply unfurl the mirrors and orient them so that they direct a beam of concentrated sunlight toward the object's surface. This provides the necessary heating without the need for a high-powered laser.

Then again, why not use the orbiting spacecraft without all of the tricks and gimmicks? Doesn't it have mass and, as a result, gravity? And doesn't gravity pull on nearby objects? Why, yes, Sir Isaac, it does.