Play Tetherball With the Asteroid 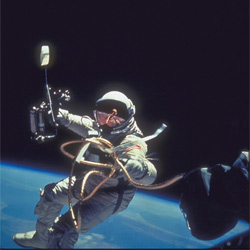 Tethers prove awfully handy in space, whether you're out taking a stroll or trying to move an asteroid.
Sightseeing Archive/Getty Images

In 2009, a doctoral candidate at North Carolina State University proposed a novel asteroid-deflection technique in his dissertation. This was the idea: Attach one end of a tether to an asteroid and the other end to a massive weight known as a ballast. The ballast acts like an anchor, changing the asteroid's center of gravity and diverting its trajectory over the course of 20 to 50 years, depending on the size of the rock being moved and the weight of the ballast.

The student didn't work out every detail, but he estimated that the tether would need to be somewhere between 621 miles and 62,137 miles (1,000 and 100,000 kilometers) long. He also suggested a crescent-shaped attachment bar similar to those found on globes. This would allow the asteroid to rotate without tangling the tether (no one likes a tangled tether).

Now, if you think this sounds just too wacky to work, you should know that astronomers have embraced space tethers for years. In fact, NASA has used them successfully on several missions to move payloads in Earth's orbit. Future missions call for delivering material to the moon by handing off payloads across a series of tethers.

Still, a tether and ballast system, like most solutions in our countdown, requires time. And time requires early detection. As we'll see next, asteroid detection may be far more important than deflection.