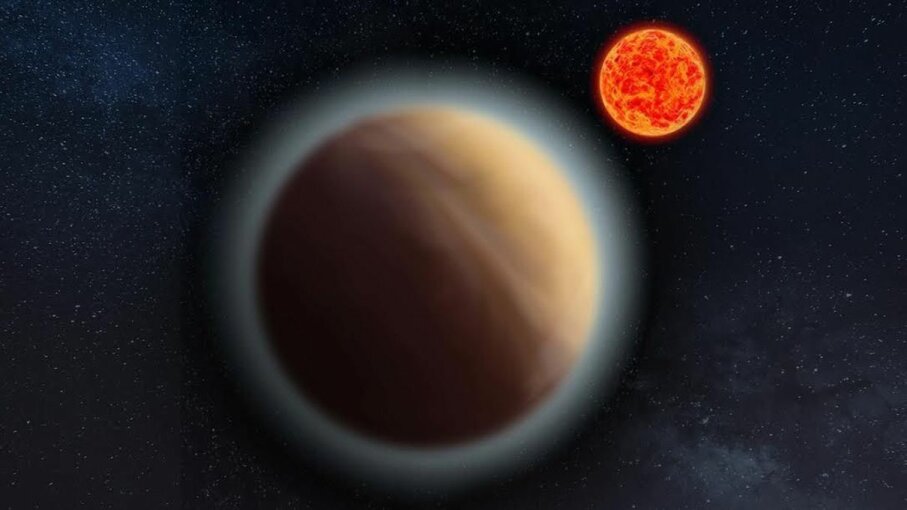 Artist's impression of Gliese 1132b and its red dwarf star. MPIA

Astronomers have discovered the smallest exoplanet yet that has an atmosphere. The rocky world, located 39 light-years away, is known as a "super-Earth," as it's 40 percent bigger than our planet and 60 percent more massive.

However, since this discovery was announced on April 6, there's been some excitement about how "Earth-like" Gliese 1132b could be. Sadly, Gliese 1132b probably has more in common with toxic Venus — the exact opposite of our temperate world. So, before you get too excited about Gliese 1132b being some exotic alien travel destination, consider these points before planning your next interstellar getaway to Gliese 1132b or any "Earth-like" exoplanet.

This is a big problem: Gliese 1132b orbits really, really close to its host star. The star, called Gliese 1132, is an M dwarf (commonly known as a red dwarf). These diminutive stars are dim and cool and have "habitable zones" that are much more compact than that of our sun, which is bigger and brighter and is a yellow dwarf. The habitable zone is the distance around any star that is neither too hot nor too cold for liquid water to exist on a planet's surface. On Earth (which orbits our sun within the habitable zone, obviously), where there's water, there's life, so finding a world within its star's habitable zone is exciting for our quest to find alien life.

Sadly, Gliese 1132b orbits its star at a distance of 1.4 million miles (2.3 million kilometers), and it takes only 1.6 days for the exoplanet to travel around the star once — yes, a year on Gliese 1132b is 1.6 days! — so it receives 19 times more radiation from its star than Earth does from the sun. This means that its upper atmosphere is around 500 degrees Fahrenheit (260 degrees Celsius), and its surface temperature is likely hotter than Venus' – hot enough to melt lead.

2. Its Atmosphere Is Probably Thick With Methane or Super-hot Water Vapor.

Astronomers detected Gliese 1132b's atmospheric gases by watching the exoplanet orbit in front of its star. This exoplanetary detection technique is known as the "transit method" and as the exoplanet passed in front, the researchers measured its physical size by how much starlight it blocked.

Artist's impression of exoplanets passing in front of (or "transiting") their star.
NASA

Interestingly, they also were able to measure the dimming of infrared light using the 2.2 meter ESO/MPG telescope at La Silla Observatory in Chile. Certain infrared wavelengths were blocked while others passed through. Planetary atmospheres can block certain wavelengths of light, depending on what kind of chemicals they contain, so the fact that one wavelength of infrared radiation is blocked while another passes through can help astronomers understand that there's not only an atmosphere there, but also provide clues as to what it's made of.

So Gliese 1132b has an atmosphere and, according to computer simulations, the researchers could determine that this atmosphere might be composed of water vapor or methane. Although water and methane are linked with biological processes on Earth, at the extreme sauna-like temperatures on Gliese 1132b's surface, "life as we know it" would die off very quickly.

For this study, the researchers could only make computer models of the atmosphere as we don't currently have telescopes that are powerful enough to actually "see" the chemicals it contains, but when the next-generation Thirty Meter Telescope (TMT) eventually goes online, we'll be able to scan exoplanets' atmospheres to see what they're really made of.

Our planet spins on its axis once every 24 hours, giving us day and night. Also, we orbit the sun for 365 days, which is one year. But on Gliese 1132b, one day is the equivalent of one year — weird, right?

This phenomenon is known as "tidal locking," and it means that Gliese 1132b evolved so close to the red dwarf that one hemisphere is permanently facing its star in perpetual day, while the other hemisphere is in eternal night. In other words, this alien world spins once on its axis every 1.6 days – the exact same time as it takes to orbit the star. This is a very un-Earth-like quality!

4. Its Star Probably Has a Temper.

Red dwarfs are the most common types of stars in our galaxy, and astronomers looking for habitable exoplanets think that the first alien biosignatures will be detected on worlds in these systems. Indeed, there's a "habitable zone" exoplanet orbiting the neighboring star Proxima Centauri, only 4.2 light-years away, boosting hopes that humankind might one day develop the interstellar spaceships to visit the world, called Proxima b.

Unfortunately, red dwarfs are known to have bad tempers — they flare regularly, blasting ionizing clouds of particles into space and accelerating stellar winds, bathing any nearby planets in powerful radiation. As we know, radiation is bad for life, and stellar winds can strip nearby planets of their atmospheres. In short, red dwarfs might not be such a great place for alien life to evolve, in the habitable zone or not.

Red dwarf stars are known to generate powerful flares, which can make them not much fun to be around.
Casey Reed/NASA

But now that astronomers have discovered a small "super-Earth" sporting its own atmosphere so close to its star, there is reason to be excited. Sure, Gliese 1132b isn't "Earth-like" by any stretch of the imagination — it's hot, probably toxic, has a day as long as a year and liquid water can't exist on its surface — but the fact that it has an atmosphere at all provides clues that other red dwarf exoplanets are likely out there with their own atmospheres able to resist the onslaught of their ferocious stars. And, if a few of these exoplanets exist in the habitable zones of their stars (like Proxima b), perhaps they've been able to hold onto their atmospheres long enough for extraterrestrial biology to take hold and alien life to evolve.

So, now that we know a tiny rocky world orbiting a tiny star 39 light-years away can support its own atmosphere, the future could be bright for finding evidence of alien biology on super-Earths orbiting red dwarf stars.

But Gliese 1132b probably isn't one of them.

Now That's Interesting
Astronomers predict that any closely orbiting planets around red dwarfs are tidally locked, but there is an example of tidal locking very close to home: The moon is tidally locked with Earth. That's why we only ever see one side of it.