Browse the article Uranus: The Planet on a Very Tilted Axis 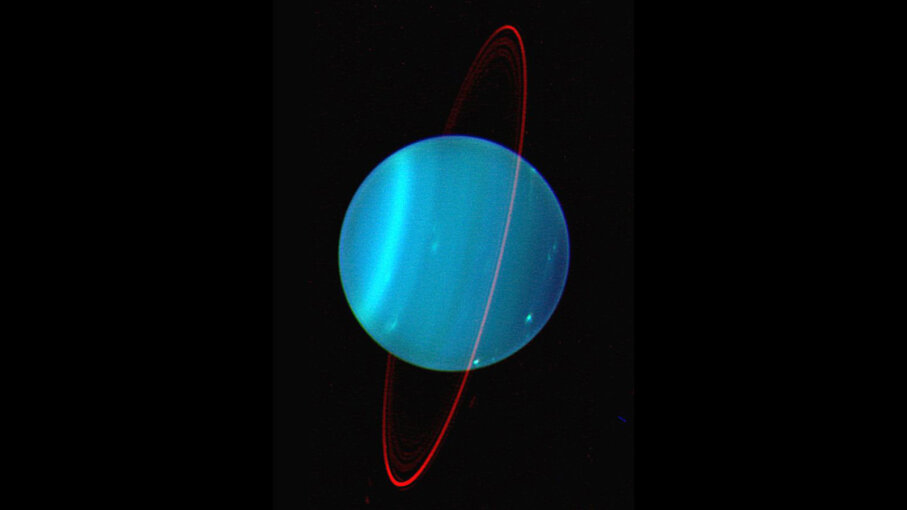 It's funny. There are eight planets in this solar system and Neptune is the farthest from the sun. Yet it still releases more heat than Uranus, planet No. 7. Four times wider than Earth, Uranus is also about 14.5 times as massive as the world we live on. After Jupiter and Saturn, it's the biggest planet in the sun's orbit.

Scientists have coined an appropriate term for large, chilly bodies like Uranus: ice giants. Good old Neptune falls into the same category, but Uranus is quite an odd duck compared to its neighbor planet. For starters, Uranus spins on an extreme tilt, resulting in some crazy seasons around the poles.

Even the ice giant's name is a bit peculiar, and not just because it makes schoolboys chuckle.

OK, let's not kid ourselves. You're never too old to enjoy a good Uranus joke. Headline writers certainly don't think so, if article titles like "NASA Wants to Probe Uranus in Search of Gas" and "Uranus Smells Like Farts" are any indication.

English-speakers tend to pronounce "Uranus" in one of two ways. Some folks say, "urine us," but most prefer the alternative which sounds like "your anus." Comedy gold, right?

(In a bid to minimize rectum comments, Planetary Society blogger Emily Lakdawalla has trained students to point and shout "You're a nuss!" when the name is dropped.)

Puns aside, Uranus represents a break with nomenclatural tradition. Mercury, Venus, Mars, Jupiter, Saturn and Neptune all took their names from Roman gods or deities. However, Uranus — uniquely — was named after a Greek god.

In the religion of ancient Greece, Uranus was revered as the primordial god of the sky. He had a son named Cronos and a (more famous) grandson known as Zeus. These figures were later conflated with two Roman deities: Saturn and Jupiter.

Though the planet Uranus was discovered by astronomer William Herschel March 13, 1781, he didn't give it the name we use today. A loyal Briton, Herschel wanted to call this faraway world Georgium Sidus — or "George's Star"— in honor of King George III.

Bode may have been German, but the planet he named looks like it's trapped in a Dutch angle.

Planets rotate around an axis, the line connecting their northern and southern poles. And speaking of spin cycles, you probably know that all the planets in this solar system are simultaneously orbiting the sun.

Now Earth has an axial tilt of 23.5 degrees. This means there's a 23.5-degree angle between Earth's axis and its plane of orbit around the sun. Without the tilt, our home world wouldn't have seasons (or possibly life).

Uranus is skewed, too — but to a much greater extent. In relation to its orbital plane, the ice giant's axis has been tilted at a jaw-dropping 97.7-degree angle.

Next to Saturn and Neptune, Uranus looks like its lying on its side. What's up with the weird orientation? A computer simulation published in 2018 suggests Uranus was hit by a huge proto-planet around 4 billion years ago. Supposedly, this collision gave the ice giant its exaggerated tilt. Then again, perhaps there were multiple impacts. A long-gone circumplanetary disk might've also played a role here.

The tilt subjects both poles to long, dark winters and long, bright summers. One year on Uranus lasts for roughly 84 Earth years. Each pole is aimed almost directly at the sun — for about 21 straight Earth years — during its summer season. Meanwhile, the other pole faces the opposite direction, enduring a sunlight-free winter.

The Planet's Sights and Smells

Despite the extreme tilt, Uranus is warmer at the equator than it is at either pole. Nobody knows why, and this isn't the planet's only mystery. Jupiter, Saturn and Neptune all radiate more than twice as much heat as they receive from the sun. Yet Uranus's heat output is significantly lower. The disparity has long baffled planetary scientists.

As we already mentioned, Uranus and Neptune are both ice giants. Planets of this sort have rocky cores covered by mantles rich in ammonia, methane and icy water. Next up, there's the atmosphere, whose outer level is full of hydrogen, helium and even more methane.

Researchers have found that Uranus's atmospheric clouds contain hydrogen sulfide, a compound responsible for the rotten egg stench we all know and hate. So yes, Uranus literally stinks.

To boot, the densest part of its atmosphere sees brutal temperatures of -243 to -370 degrees Fahrenheit (-153 to -218 degrees Celsius). That's hardly a welcoming environment for future astronauts.

At least the color scheme would be familiar. Earth isn't the only "blue planet" in this solar system: Methane absorbs red light, giving Uranus and Neptune deep-blue complexions. Of the two worlds, Uranus looks slightly greener.

Using infrared filters, the Hubble Space Telescope captured detailed images of three layers of Uranus' atmosphere in 1998. The red around the planet's edge represents a very thin haze at a high altitude. The yellow near the bottom of Uranus is another hazy layer. The deepest layer, the blue near the top of Uranus, shows a clearer atmosphere.
NASA/JPL/STScI

Since 1977, we've known that Uranus has a ring system around its equator. To date, astronomers have counted 13 rings encircling the planet. The structures are relatively dim and lack the fine particles observed in other ring systems (like Saturn's). Each one is composed of debris chunks that are golf ball-sized at minimum. For some reason, smaller material gets exiled into the spaces between these rings.

Uranus also has 27 known moons, 25 of which were named after Shakespeare characters like Ophelia, Juliet, Desdemona and Puck. Then there's Miranda, whose namesake appears in "The Tempest" (one of the Bard's later plays).

Geologically complex, Miranda contains the single tallest cliff known to mankind. Dubbed "Verona Rupes," it has an estimated height of 12.4 miles (20 kilometers). If a clumsy human were to fall off the peak, scientists think he or she would plummet for 12 minutes straight before hitting the ground.

Other satellites of note include Sycorax and Caliban. While most of Uranus's moons spin in the same direction as the planet does, these two revolve the other way. Scientists think they were once independent objects that the ice giant's gravity ensnared. By the way, Caliban is another "Tempest" character — and Sycorax was said to be his mother.

From its weird rings to its puzzling climate, Uranus has found plenty of ways to surprise us. Only time will tell what further mysteries the planet holds. To steal a line from "Hamlet," "There are more things in Heaven and Earth, Horatio, than are dreamt of in your philosophy."

Although it's very dim, Uranus is visible to the naked eye on certain dark, clear nights. However, even when the ice giant is out and about, you'll need sharp vision to see it without binoculars or a telescope.