by Jonathan Atteberry
Prev NEXT
2 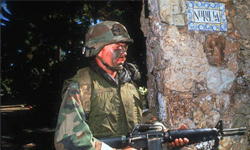 In 1903, Panama entered into a treaty with the United States that would allow the U.S. to construct, administer and defend a stretch of land that would become the Panama Canal. By 1999, Panama finally had taken control of the maintenance and operation of the canal, but not before undergoing nearly a century of political turmoil that ultimately would lead to the dissolution of its military.

Panama first ran into the dangers of an unchecked military in 1968, when it threw the democratically elected president, Dr. Arnulfo Arias Madrid, out of office for the third and final time before taking over. The military would play a major role in Panama's government throughout the 1980s, when Gen. Manuel Noriega came to power. The U.S. originally supported Noriega, but as corruption, drug trafficking and election tampering became widespread in Panama, tensions between the countries mounted.

In 1989, the U.S. invaded Panama, removing Noriega from power and ushering in democratic elections. Thanks to the deep distrust Panamanians held for the military, the government adopted a constitutional amendment disbanding the military in 1994. Despite a much-improved relationship, Panama has refused to allow the U.S. to set up a military base for combating drug trafficking within its borders. After all, if you don't trust your own army, you probably won't trust that of another country.

When the very name of your nation screams "I'm tiny!," perhaps it's better to leave your defense up to a much larger ally, which is exactly what the next country on our list decided to do.