Browse the article 5 Technical Innovations in the War on Terrorism 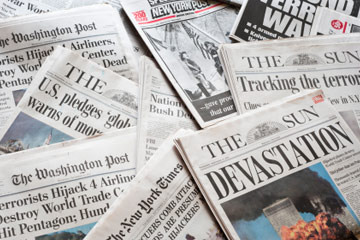 After the 9/11 attacks on the U.S., many world governments stepped up their antiterror initiatives.
©iStockphoto/EyeJoy

In our article How Terrorism Works, we explain that the goal of terrorists is to create fear in their victims and to use that fear as a weapon. While there are some known terrorist organizations around the world, many terrorists act alone or in small groups. In the U.S. alone, terrorists have ranged from mail bombers to school shooters to people parking trucks full of explosives in front of buildings.

A foreign group that had been operating inside the country for some time orchestrated the terrorist attacks on the U.S. on September 11, 2001. That fact, combined with the magnitude of damage and lives lost that day, achieved the goal of creating fear throughout the U.S. Nine days after the attacks, President George W. Bush delivered an address to a joint session of Congress and the American people, declaring a war on terrorism. Most of that ongoing war targets known terrorist organizations in the Middle East.

Unlike an open war, though, a war on terrorism isn't as straightforward as meeting the enemy on a battlefield and fighting it out. For this specialized conflict, military and intelligence organizations are using innovative technologies to identify terrorists and defend against terrorist attacks. This article looks at five such innovations now in use from the home front to the battlefield.

Let's start with a look at a controversial technology that's increased efficiency for security personnel keeping you safe at the airport. 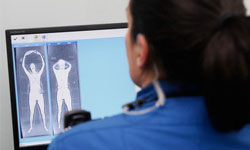 Backscatter X-ray scans like this one reveal anything hiding under your clothes.
Scott Olson/Getty Images

After the terrorist attacks in the U.S. on September 11, 2001, Americans faced the reality that terrorists could leverage commercial airplanes as powerful weapons. Consequently, fliers have had to endure the inconvenience and discomfort of more rigorous security checks at airports so they can feel safer. One of the technical innovations designed to speed up and improve accuracy in these security checks is the backscatter X-ray system.

Backscatter X-ray scans are weaker than X-ray scans you might get at the doctor, only penetrating slightly past the surface of the skin. When used for full-body scanning at airports, backscatter X-rays provide security personnel with pictures of what passengers might be hiding under their clothes. This includes organic and inorganic items that metal detectors alone would have missed.

Civil rights groups have protested the extent to which the U.S. Transportation Security Administration (TSA) uses backscatter X-rays at airports. Groups like the American Civil Liberties Union (ACLU) are concerned that the X-ray image shows details of a person's body that are otherwise hidden by clothing, including attached medical devices such as a colostomy bag or portacath. Currently, the only alternative to the backscatter X-ray is a thorough and equally controversial pat down by a TSA official.

Our article How Backscatter X-ray Systems Work takes an even closer look at this technology. Next, let's look at a technology that examines the mind as well as the body.

If you knew a robber was going to invade your home tonight, would you do anything differently? What if you knew who that robber was in advance? The U.S. Department of Homeland Security (DHS) has a number of behavioral sciences projects aimed at identifying criminal intent before a crime happens. One of these projects has produced the Future Attribute Screening Technology (FAST) [source: DHS].

Like the backscatter X-rays mentioned earlier, FAST is a screening technology intended for use when security personnel need to quickly identify potential threats. Similar to the way a lie detector works, FAST measures your physiological responses. Unlike the lie detector, though, FAST requires no direct physical contact with the subject being analyzed, and airports and public buildings could use it similar to the way they use security cameras [source: DHS, Weinberger].

FAST incorporates multiple technological advances that are rather remarkable on their own. Original plans for FAST included a remote cardiovascular and respiratory sensor, a remote eye tracker, thermal cameras and high-resolution video [source: DHS].

As field tests began for FAST in mid-2011, questions remain about how security personnel should respond if FAST detects a potential problem. Can we definitely prove the person in question actually had criminal thoughts even though no crime was committed? Even if that proof exists, should law enforcement be able to detain or even punish a person just for a thought?

Time will tell how government security groups like the TSA use FAST, and whether private security companies will be able to use FAST technology. In the meantime, the next technology is making it faster and easier to determine whether a person is already in a criminal database. 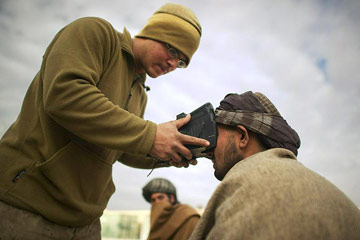 A Marine uses a SEEK II device to take a biometric picture of an Afghan man.
©Cross Match Technologies, Inc.

Law enforcement organizations around the world store arrest and criminal records in databases. Intelligence organizations, like the Federal Bureau of Investigation (FBI) in the U.S., do the same for people they're tracking. These records store everything from photos and fingerprints to retinal scans and DNA analysis to create comprehensive digital dossiers. During a crisis, when time is of the essence, it's important to have fast, reliable access to that data.

The U.S. Department of Defense (DoD) wants to make sure that when soldiers are in the field, they can quickly retrieve necessary information to ensure appropriate action is taken without delay. Soldiers also need to be able to gather and save new information to those databases with the same speed. A device known as the Secure Electronic Enrollment Kit (SEEK II) is helping them do just that.

The SEEK II is a handheld electronic device that records a person's biometric data. Developed and marketed by Cross Match Technologies, the SEEK II can capture fingerprints, facial scans and iris scans. Soldiers can send that data over a 3G wireless network or a direct USB connection to a nearby network-connected computer. As of this writing, the U.S. Special Operations Forces (SOF) uses the SEEK II more than any other device for gathering biometric data during missions all over the world [sources: Cross Match, McCleary].

Now, let's zoom out and look at a technology that's helping intelligence groups keep a better eye on things from the above. 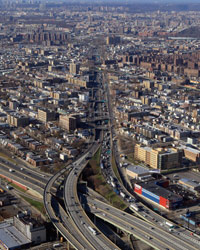 Without the help of a CIIMS device, performing a rapid analysis of an area from an aerial view is extremely challenging.
Bruce Bennet/Getty Images

You're probably aware that law enforcement and military agencies use aerial photography and surveillance as part of their work. If you've ever looked out of an airplane window while you're in flight, though, you know it can be difficult to make sense of anything on the ground when you're looking at it from the air. Thus, a map and GPS are an essential part of in-flight surveillance.

An innovative system known as the Critical Infrastructure Inspection Management System (CIIMS) is going beyond static map and GPS data. CIIMS features mobile tablet devices with touch screens, similar in function to the Apple iPad or Motorola Xoom. Using CIIMS, people conducting air surveillance can send and receive real-time information about activities on the ground. This means that both air and ground forces have access to crucial data needed to make swift decisions during a crisis [source: DHS].

CIIMS started as a partnership between DHS and the Maryland State Police (MSP), funded by DHS. The system was designed by researchers at The Johns Hopkins University Applied Physics Laboratory. By mid-2011, the Los Angeles Police Department (LAPD) had joined the MSP as a proving ground for CIIMS technology [source: CIIMS].

So far, we've looked at technology that plays an active role in the war on terrorism. Coming up, let's immerse ourselves in a technology that's getting soldiers prepared for action even before they're in the field. 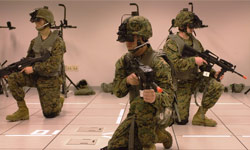 No matter how much a solider trains to handle a situation, the real world always throws something unexpected. This is especially true in the war on terrorism where soldiers have to defend against covert forces that have no consistent mode of attack. To better prepare its troops to respond to the unanticipated, the U.S. military now employs immersive computer simulators that provide a game-like interaction for both individuals and groups.

The group simulators have probably made the biggest difference in the war on terrorism. Soldiers are in a room together wearing virtual reality gear over their eyes and handling equipment such as turrets, rifles and steering wheels. All the gear and equipment is plugged into the simulator, which feeds the soldiers the variables of the simulation and, in turn, responds to the soldiers' movements.

In one simulator called the Virtual Convoy Operations Trainer (VCOT), a team of soldiers, each in different roles, handles certain scenarios as they travel in a virtual convoy. VCOT trains troops to communicate and work together when the virtual terrorists put them in an unplanned combat scenario. The Future Immersive Training Environment (FITE) takes the battle out of the convoy, training infantry to work together during ground combat. FITE simulates sights, sounds and even smells of a Middle East war zone [source: Pellerin].

For more details on this immersive military training, see our article on How Virtual Reality Military Applications Work.

The innovations we've covered in this article are just a small set of amazing technologies that have improved our defense in the ongoing war on terrorism. March on to the next page for lots more information on the technology used in the war on terrorism. 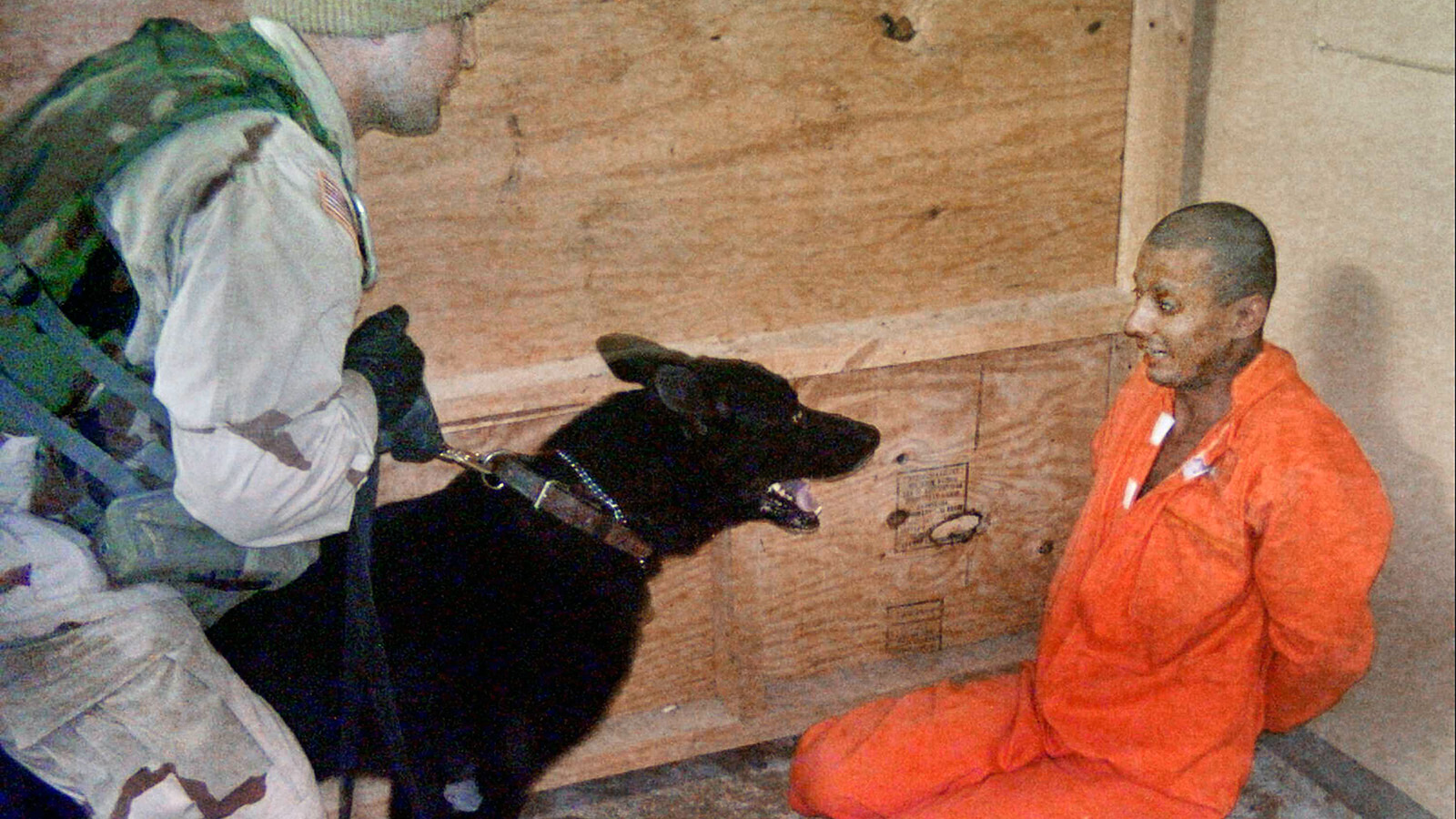