by Nicholas Gerbis
Prev NEXT
3 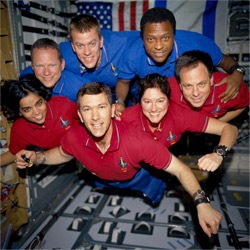 That's Ilan Ramon (bottom right in red) with the rest of the STS-107 crew. Israel hasn't given up on space since losing one of its own in the Columbia accident though.
Photo courtesy NASA

A nation of few natural resources, Israel has long relied on high technology exports such as aviation, communications and fiber optics to help drive its economy. Perhaps that's why this Middle Eastern nation of 8,019 square miles (20,770 square kilometers, roughly the size of New Jersey) leads the pack in the race to the stars by not only operating satellites, but also launching them into space aboard homegrown rockets.

On Sept. 19, 1988, the parliamentary democracy of 7.5 million propelled its first satellite, Ofeq-1, into orbit using an Israeli Shavit three-stage launch vehicle, distinguishing it as the eighth country in the world to achieve such a feat. Israel's technological advances, particularly in miniaturization, helped to make its rocket and satellite programs possible.

In 2003, the first Israeli astronaut, Ilan Ramon, joined the space shuttle Columbia as its payload specialist. Sadly, his first flight was to be his last, as that was the fateful flight that saw the shuttle break up over Texas.

Israel has emerged as a player in commercial space, and the Israel Space Agency has collaborated with NASA, France and Germany in several ventures. The country has also recognized the value of space-based research, such as medical studies in microgravity and space-based crystal growth.

In July 2010, Israel announced that it would stake $77.5 million over five years to spur a civilian space program, projecting that it could seize 5 percent of the market and grow into a $10 billion civilian space industry [source: UPI].

For our next little giant, we'll travel to the Gibraltar of the north.