The Future of Aerogels 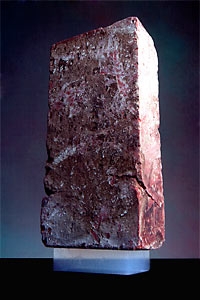 A 5.5 pound brick is supported by a piece of silica aerogel weighing only 2 grams (0.07 ounces).
NASA/JPL-Caltech

Although aerogel is expensive, researchers are still experimenting with ways to make it stronger, cheaper and less hazardous. For example, Professor Nicholas Leventis from the Missouri University of Science and Technology amazed the science world in 2002 with the announcement that he had developed a method for making non-brittle aerogels. Leventis's aerogels, known as x-aerogels, are not only stronger; they're also more flexible, waterproof and impact resistant. The downside is that x-aerogel production requires more hazardous chemicals and takes more time; these chemicals also decrease its insulation ability [source: Aerogel.org, Strong]. Despite some negatives, x-aerogels have the following possible applications:

Additionally, aerogels could help with the push for more "green" technology. Carbon aerogel holds great potential for supercapacitors and fuel cells for energy-efficient automobiles. In fact, the energy storage capacity of carbon aerogel could bring about a slew of new technologies, but only if aerogel's production price becomes more affordable for large scale operations.

The good news is that you don't have to be a well-funded research scientist to experiment with making new aerogels. Want to make your own aerogel? Though it's possible to do this at home, it's best done in a laboratory that contains all the necessary materials, including an autoclave to supercritically dry your aerogel. (If you're feeling super productive, here are instructions on how to make your own supercritical dryer.) Ask around your local university or community college; chances are, if you tell them you have a recipe you want to work with, they may let you use their equipment [source: Hunt and Ayers, Making; Aerogel.org, Build].

Several Web sites provide instruction on how to make aerogels, including aerogel.org and this one from the University of California. Regardless of where you make your aerogel, safety precautions are a must. Wear goggles, gloves (the best kind are dishwashing gloves), long pants, closed-toe shoes and a painter's mask to protect yourself from hazardous fumes and flammable materials. [source: Steiner, How to Make; Hunt and Ayers, Making]

Aerogels -- is there anything they can't do? Hopefully the public will be on a first-name basis with them in the near future. For more information on aerogels and related topics, check out the links below.