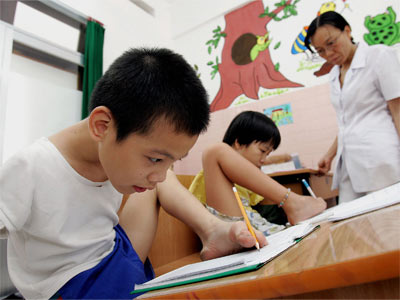 There is a lot of controversy and debate about the actual health effects of Agent Orange. The Institute of Medicine of the National Academy of Sciences claimed that an "association" exists between Agent Orange and some types of cancer. Some, such as the chemical companies facing lawsuits, argue that there's no way to judge definitively whether a health problem has been caused by Agent Orange or the dioxins it contains [source: Glaberson]. But areas in Vietnam where Agent Orange was used showed and continue to show a high rate of certain diseases, birth defects and cancers.

Some Vietnamese who came into direct contact with Agent Orange quickly developed skin irritations that turned into lesions and tumors. Others attribute their cancers and multiple miscarriages to living in areas sprayed with the herbicide [source: Glaberson].The massive number of sick Vietnam veterans, especially those who handled Agent Orange, and Vietnamese civilians has all but eliminated any other possible cause. In addition, many Vietnamese have very high quantities of dioxin in their blood, up to 200 times above normal levels [source: Hitchens]. That substance's toxicity is not disputed.

Among the many complications associated with Agent Orange and dioxin are:

­On the­ next page, we'll take a look at some of the lawsuits and attempts at reparations resulting from the use of Agent Orange.