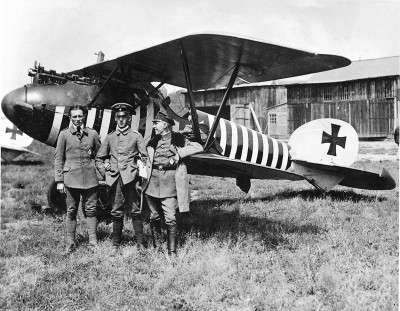 More than 1,050 Albatros D.V and Albatros D.Va fighter planes were active over the Western Front and elsewhere in 1918.

One of the most aesthetically attractive fighters of World War I, the Albatros D.Va (with its basically identical predecessor, the D.V) was built in great numbers (4,682) and served for many months on the Western Front, but this classic airplane has never had the devoted following given other German fighters.

The Albatros D.Va was a good workmanlike aircraft, not unpleasant to fly, but its performance was mediocre. Worse, its V-strut arrangement (which had most unwisely been copied from the French Nieuport fighters) created structural problems that forced World War I pilots to be dangerously cautious in dogfights.

The success of the earlier Albatros fighters had been phenomenal, so great in fact that the Allies responded to their threat with a flurry of new designs including the SPAD VII, Sopwith Camel, S.E.5a, Bristol F2B, and others. Each of these surpassed the Albatros D.IIIs they faced -- and each of them would prove to be equal to, if not superior to, the Albatros D.V and its slightly modified follow-on, the Albatros D.Va.

The heart of the German problem in the Albatros, as in all their fighters, was an inability to develop engines of comparable horsepower to those installed in Allied planes. The Albatros D.V appeared in 1917 with basically the same Mercedes engine that had powered the earlier versions, boosted to about 180 horsepower through the use of higher compression. The maximum speed of 103 miles per hour was unchanged.

Baron von Richthofen was particularly vehement about the substandard performance of his Albatros fighters, especially after he had been severely wounded and almost killed while flying one. Yet, for many long months the German pilots were forced to rely on the Albatros, which continued in service to the very end of World War I.