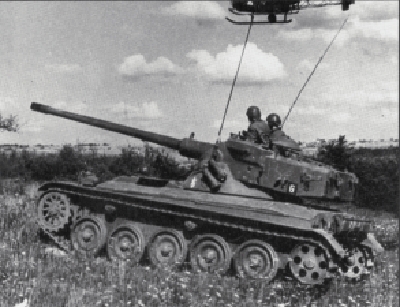 The French AMX-13 Light Tank was used as a tank destroyer and for reconnaissance. It had an oscillating turret, and its 90mm main gun was equipped with an automatic loader. See more tank pictures.
©2007 Publications International, Ltd.

In 1946, when design work on France's AMX-13 Light Tank began, the tank was intended to be a destroyer/reconnaissance vehicle. As the tank neared development, the manufacturer, Atelier de Construction Roanne (ARE), modified the design slightly and produced a true light tank.

The hull of the AMX-13 Light Tank is all welded and is divided into three compartments: The driver and engine compartments are located at the front, and the turret is mounted at the rear.

Probably the most distinguishing feature of the AMX-13 is its Fives-Gail Babcock two-part oscillating turret. The main gun is fixed in position in the upper half of the turret; to elevate or depress the gun, the upper half is pivoted onto the lower half. Use of this oscillating turret permits the adoption of an automatic revolver loading system in which each magazine holds six rounds.

Initially, the main gun for the tank was the standard 75mm cannon with a single baffle muzzle brake. The gun had a rate of fire of one round every five seconds until the two six-round magazines were empty.

Once the rounds were discharged, the magazines had to be refilled by hand outside the tank. The tank carried a total of 37 rounds of ammunition and also sported either a 7.5mm or 7.62mm machine gun that was mounted coaxially on the right side of the main gun.

Another machine gun could be mounted externally near the commander's position. The tank also had a total of four electrically operated smoke dischargers, two on either side of the turret.

None of the AMX-13 tanks were equipped to operate in a nuclear-biological-chemical warfare environment, and only a few countries outfitted the tank with any sort of night fighting/detection equipment or sensors.

Many of the nearly 20 different countries who have used the tank retrofitted their inventory of tanks with either the larger 90mm or 105mm guns.

AMX-13 Light Tanks armed with the 90mm gun first entered service in the mid-1960s, and all tanks in the French Army were retrofitted with this cannon by the early 1970s.

With the larger gun, the tank carried 34 rounds of ammunition, of which 21 are carried in the turret -- 12 in the magazine. The combination of the 105mm rifled gun and the FL-12 armored turret was developed exclusively for the export marketplace.

Although production ceased in the 1980s, the AMX-13 Light Tank has remained a viable choice for many smaller nations seeking a proven tank design that can also be adapted for use as an armored personnel carrier, an air-defense vehicle, an armored recovery vehicle, and even a self-propelled howitzer.

To learn about AMX-13 Light Tank specifications, continue to the next page. 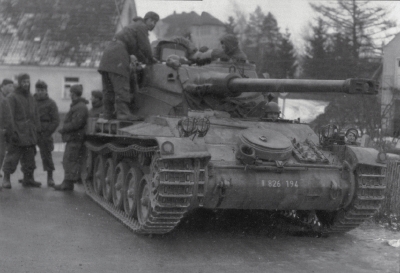 The French AMX-13 Light Tank has been widely sold to at least 25 other nations, including El Salvador and Switzerland.
©2007 Publications International, Ltd.