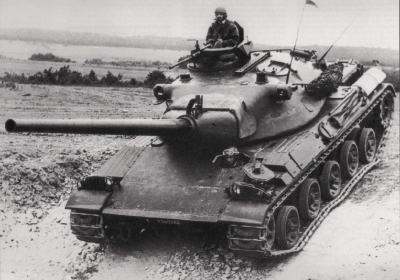 The AMX-30 served as the principal Main Battle Tank (MBT) for the French Army.

Development began in the mid-1950s as a joint Franco-German MBT. The first of two prototypes was completed in 1960, but the joint cooperation between the two nations did not materialize.

Adopted by the French Army in 1963, the AMX-30 Main Battle Tank went into production in 1966 and was built to replace the aging American-supplied M-47 tanks.

The AMX-30 Main Battle Tank's hull is made of rolled steel plates that are welded together and divided into three compartments. The driver is seated in front on the left side, while the remaining three crewmembers -- gunner, loader, and commander -- are seated in the turret.

Unique to the tank is its Renault-produced Hispano-Suiza 12-cylinder, water-cooled supercharged engine that can operate on oil, petrol, or paraffin. In addition, this multifueled power plant, its gearbox, clutch, and steering unit can be removed for replacement in less than 45 minutes.

The main gun on the AMX-30 Main Battle Tank is the 105mm CN-105-F1. The gun has neither a muzzle brake nor a fume extractor but is fitted with a magnesium alloy thermal heat sleeve. The tank uses a compressed air system to blow any fumes from the barrel.

The gun's recoil equipment is made up of two diametrically opposed hydraulic brakes and a counter recoil barrel system. The AMX-30 carries a total of 47 rounds of ammunition, 19 of which are stored in the turret area, while an additional 28 are located to the right of the driver in the tank's hull.

In addition to its powerful main gun, the AMX-30 Main Battle Tank has its own built-in anti-air defense system in the form of a 20mm Model F2 cannon located on the left side of the main armament.

Capable of being elevated 40° higher than the main gun, the M693 cannon has an effective range of nearly 1,500 meters and can fire hundreds of high-explosive incendiary or armor-piercing rounds at low-flying attack helicopters or fixed-wing aircraft.

Additional armament includes a commander's 7.62mm Model F1 machine gun and a total of four smoke dischargers, with two mounted on either side of the turret. The smoke dischargers can lay an effective smoke screen in less than three seconds and totally hide the tank in less than eight seconds.

Outfitted with a self-contained nuclear-biological-chemical protection system, the AMX-30 Main Battle Tank underwent an upgrade to the AMX-30 B2 configuration.

With the new laser range finder fire control system, once a day the tank commander inserts information about the type of ammunition to be used, drift angles, temperature, altitude, cross-wind velocity, and humidity. With the information stored in the tank's computers, the fire control system calculates the target's distance, speed, and even the lead necessary to engage and destroy it.

With the upgrade modifications, the AMX-30 B2 remained the French Army's Main Battle Tank until it was replaced by the Leclerc MBT.

For the nations that currently use the remaining AMX-30 tanks, France has offered the basic B2 retrofits, along with a host of additional options -- improved nuclear-biological-chemical protection capabilities, new day/night gyrostabilized sights, thicker gun shields, and additional appliqué armor protection plates.

To learn about AMX-30 Main Battle Tank specifications, continue to the next page.