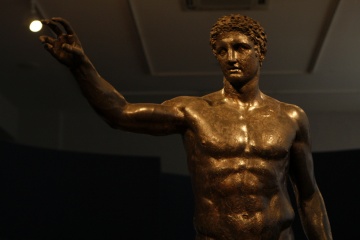 It was another storm that led to the recovery of the mysterious mechanism. In the spring of 1900 a small boat full of sponge divers from an island in the eastern Aegean was making its way to the coast of North Africa when a sudden storm blew it off course. When the storm cleared, the divers found themselves in the harbor of Antikythera, an island between Crete and mainland Greece.

Greeks have been diving for sea sponges for millennia. They even made it into an Olympic sport. Captain Dimitrios Kontos wasn't about to waste an opportunity. He and his team circled around the island to a likely spot at the foot of a headland.

In the very old days, by necessity, the pros free-dived for sponges. But by 1900 a recent innovation had revolutionized the industry. One of Kontos' team, Elias Stadiatis, donned the newfangled diving helmet and canvas suit equipped with a breathing hose and sank underwater. Almost instantly he was back up, visibly shaken. As he took off his helmet he babbled about mounds of corpses, humans and horses rotting in piles on the seabed.

Captain Kontos was skeptical but curious and decided to dive himself. What he found was a vast wreck strewn with ancient sculptures (of humans and horses). He came back up with a life-size bronze arm. The sailors noted the spot and continued on to their sponge-diving destination — they had work to do, after all. But when they returned, Kontos reported the find to the authorities and handed over the bronze.

A few years earlier, Greece had suffered a humiliating military defeat at the end of one of the Greco-Turkish wars. Hoping to restore national pride, the government hired Kontos and his crew to salvage the wreck. Two of the divers would become paralyzed from the bends and one would die over the course of the 10-month salvage operation. Their work would yield one of the most extraordinary collections of antiquities ever excavated from a wreck. Among the many remarkable sculptures, one object, above all, would turn out to be among the most important archaeological artifacts ever found [source: Marchant].