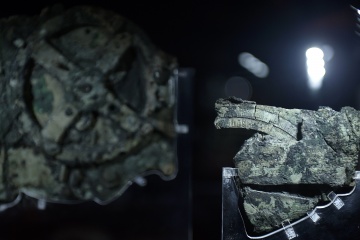 Fame came late to Item 15087. That was the file name given to the mechanism by the Greek antiquities experts responsible for examining and cataloguing the treasures salvaged from Antikythera's waters. At first none of those experts really knew what to make of it, and nobody really tried. After all, it didn't look like much — a lump of bronze about the size of a shoebox cased in what looked like some kind of wooden frame — it was distinctly unglamorous in the context of the treasure trove of extraordinary bronze and marble sculptures salvaged from the wreck.

But as the wooden frame slowly dried in the open air, it split apart. Spyridon Staïs, a Greek archaeologist, noticed the opening in 1902 and had a look inside. There he found bronze parts with tiny inscriptions on them. Further research revealed what looked like the precision gears of a mechanical clock. But, of course, that wasn't possible. According to the history of technology as it was understood in 1902, precision gearing didn't appear on the scene before the 14th century. To say that Item 15087, which sank 1,400 years earlier, contained clockwork gears would have upset the apple cart completely.

Most researchers decided the device must be an astrolabe, an ancient astronomical tool used to tell time. Others felt Item 15087 was much more complex than that, but it was too hard to glean enough evidence from the corroded metal to prove their theories.

As a result, for decades, the mechanism fell into obscurity once again. One academic has since characterized its fate as a kind of second drowning.

In the late 1950s a researcher named Derek de Solla Price became fascinated with the so-called Antikythera Mechanism. Years of obsessive research convinced him that the device was actually an archaic computer devised to predict astronomical events. With Dr. C. Karakalos, a Greek radiographer, he took the first X-rays of the mechanism, and in 1974 he published the results of his findings, titled "Gears from the Greeks."

Price theorized that each gear represented the movement of a different heavenly body. By calculating the mathematical relationship between the toothed gear wheels, he was able to deduce the astronomical cycles they embodied. Later evidence would prove his theories correct.

He thought his paper would be a scholarly bombshell, but it wasn't. It turned out that established academics were reluctant to completely rewrite the history of technology. And anyway, when it came to the ancient world, most researchers were literary scholars, more interested in epic poetry than corroded gears. For the most part, the paper was ignored.

Part of the problem was that by 1974, the Antikythera Mechanism was tainted by association with a distinctly unscientific, but wildly popular, book by a Swiss writer named Erich von Däniken. In his 1968 work "Chariots of the Gods," Däniken had proposed a theory that aliens brought technology to Earth. The Antikythera Mechanism, he argued, was one of their gifts [source: Seabrook].

But Item 15087 always had at least one or two more scientifically inclined champions. And although it took them many years to rescue the Antikythera Mechanism from the realm of UFOs, they succeeded in the end.