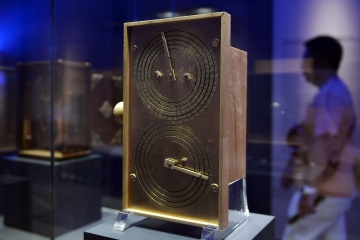 Researchers have assembled nearly a dozen replicas of the device in an attempt to better understand it.
LOUISA GOULIAMAKI/AFP/Getty Images

You know those clocks that sit on mantelpieces — the ones that are always stopped at half-past 2 because somebody forgot to wind them? In its heyday, the Antikythera Mechanism took up about as much room as one of those. Not anymore. It survives in a series of fragments. Each fragment is a lump of bronze so corroded there's no way to see what's inside without some very fancy tech.

In 2005, scholars managed to get an SUV-size device into the National Archaeological Museum in Athens where they conducted some cutting-edge computed tomography (CT) scans. The results were astounding. Using the CT scans, researchers have been able to extrapolate the construction of the mechanism from the inside out.

A knob on the side wound the mechanism forward and backward. Instead of telling time, it described the movement of the heavens. Winding the knob would have engaged a series of gears, which in turn spun a minimum of seven different hands, each moving at a separate pace. There was a hand for the Sun, another for the Moon, a third for Mercury, fourth for Venus, fifth for Mars, sixth for Jupiter and seventh for Saturn. These, of course, are all of the celestial bodies that can be seen by the naked eye.

According to an inscription revealed by the CT scans, each of the dials would have held a color-coded miniature ball representing its orb.

On the back of the case were two more dial systems. One was a calendar of lunar and solar eclipses, while the other showed the timing for important athletic events like the Olympics. The dials were based on the Metonic cycle, a sophisticated 19-year, 12-month calendar that reconciled the lunar and solar calendars. The Babylonians originated the Metonic cycle, but the Greeks refined it, creating something called the Callipic cycle, which takes four Metonic cycles and subtracts a day to arrive at a super-accurate meshing of solar and lunar time. While the Babylonians were impressive astronomers, the Greeks used geometry to make sense of it all. That's what made it possible for them to visualize the movement of celestial bodies as gears.

And by linking the movements of the heavens to the social life of ancient Greece, the mechanism was also a highly sophisticated representation of that civilization's world view. It illustrated in miniature the workings of a logical and mechanical universe. In some ways, perhaps, building the device and seeing it work so accurately might have not only affirmed the wisdom of the day, but also enriched it. If you could build a mechanical representation of the known universe, then that universe must be mechanical in nature [source: Marchant].

In 1983 a Lebanese man stumbled upon an ancient geared mechanism in a Beirut street market. The device turned out to be a sixth-century geared sundial calendar. After the Antikythera Mechanism, it's the world's second-oldest geared device — as far as we know [source: Seabrook].