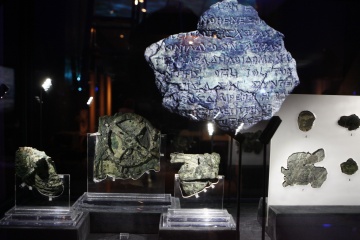 Handily, the device came inscribed with its own user's manual. Not so handily, researchers had to do a lot of work to get to it.
Aristidis Vafeiadakis/Corbis Wire/Corbis Images

What did the ancient Greeks know about astronomy? Not much of their scholarship survived in written form. We rely on later writers, like Ptolemy of Alexandria, for their accounts of what came down to them from their predecessors.

But the in-depth CT scanning of the Antikythera Mechanism has helped to fill in some of the missing information. Where once the device was viewed as an extraordinary archaeological artifact, it turns out that it's more than just a mechanism. It's also a document. Researchers were able to make out quantities of hitherto unseen text inscribed on the metalwork. The inscriptions amount to a kind of user's guide to the mechanism, and that guide contains a degree of astronomical knowledge that researchers long suspected of the Greeks but could not confirm. Now they can [source: Seabrook].

A source, for instance, from the first century B.C.E. seemed to indicate that the ancients had calendars in which they excluded certain days in order to adjust the lengths of months. Contemporary historians had long rejected this possibility as being too sophisticated to be likely. The Antikythera Mechanism proves that early source right [source: Freeth et al.].

It's all very nice to create a mechanism for contemplating and predicting the movements of the celestial spheres, but if the ancients knew so much and could build such extraordinarily sophisticated devices, why didn't they go on to invent something more useful? An actual clock, for instance? Or a telescope?

Maybe the answer is that for the ancient Greeks, making useful tools wasn't as important as it is to us. Maybe they were more interested in knowledge for the sake of knowledge rather than for the sake of getting stuff done.

Marine archaeologists with the latest in cutting-edge dive technology are once again exploring the wreck off the island of Antikythera. Who knows what they'll find? In the meantime, much about the Antikythera Mechanism itself remains a mystery. We still don't know who built it, for whom it was built or why. Just as high-tech CT scanning yielded exciting new results, even more advanced investigative methods are sure to be developed in the future. What will they reveal about the Antikythera Mechanism? While current attempts to model the device are as accurate as the available information can make them, perhaps future research will unveil previously unimagined new facets of this ancient technology [source: Marchant].

Modern tinkerers are busy building working models of the Antikythera Mechanism based on the latest research. To date there have been more than 10 models built since the first one was constructed back in the 1930s. One of the most recent incarnations of the device is in the form of a Hublot watch designed by the Swiss engineer Mathias Buttet. The watch includes the Antikythera Mechanism's functions. If you think this sounds like the perfect gift for Dad, don't waste time trying to buy it. Only three were made [source: AMRP].

No matter how hard I try to remember that history isn't linear and that progress is a false notion, I always lapse into the default assumption that one discovery builds on another in the direction of general improvement. It's good to have a crazy little artifact like the Antikythera Mechanism to remind us that there's nothing inevitable about how we got to where we are. Technologically, the ancient Greeks might have been on the threshold of an industrial age. We assume they didn't go down the path we're on because they couldn't. Maybe the real reason was that they just weren't interested.