Are we all Martians? 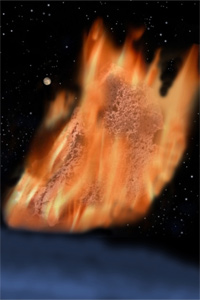 It's not quite the way you imagine extraterrestrial life landing on Earth, is it? See more Sunspot and Solar Flare Pictures.
Images Etc Ltd/Photographer's Choice/Getty Images

In summer 2011, a few Moroccan night owls saw Martians in the Sahara Desert. The otherworldly visitors didn't arrive in a flying saucer, but on a 2.4-pound (1.1-kilogram) fragment of rock that glowed red-hot in Earth's atmosphere before landing near the village of Tissint.

OK, we're taking a few liberties with the story. The rock -- a meteorite -- did indeed come to our planet from Mars. Whether we can slap a "Life On Board" sign to its black, dimpled surface remains to be seen. Other Martian meteorites, however, have provided clues about a truly tantalizing possibility: that primitive bacteria first formed on our red neighbor and then traveled through space to Earth, where they became the seeds of our spectacular biological diversity. If that idea were proved true, we'd all be Martians rather than Earthlings.

It's not a new proposal. In the 19th century, British physicist William Thomson Kelvin, known to most students as the father of the absolute temperature scale (measured in kelvins), also had a few ideas about geologic history and the evolution of life on Earth. One was that seed-bearing meteorites zipped through outer space.

"If at the present instant no life existed upon this earth, one such stone falling upon it might ... lead to its becoming covered with vegetation," Kelvin said while addressing the British Association for the Advancement of Science in 1871.

Swedish chemist and Nobel laureate Svante Arrhenius pursued a similar concept in "Worlds in the Making," which was published in 1906. In the book, Arrhenius introduced the term panspermia to describe a process by which bacterial spores could drift through the solar system on undulating currents of electromagnetic energy.

For a while, these notions seemed like the musings of hardcore scientists turned a little batty. Then, in the 20th century, evidence for panspermia became more abundant and more compelling. One of the real turning points came when NASA sent two Viking probes to Mars in 1975. The Viking 1 lander touched down in Chryse Planitia, Viking 2 in Utopia Planitia. Both snapped photos of the Martian landscape and then measured various properties of the atmosphere and soil. The Viking data didn't conclusively prove the existence of life on Mars, but it did reveal the red planet had a unique ratio of noble gas isotopes in its atmosphere.

In the 1980s, scientists discovered a similar chemical signature in a group of space rocks known as the SNC meteorites (named after three representative members of the group: Shergotty, Nakhla, Chassigny). The gases found trapped in these meteorites matched the gases detected by the Viking landers when they tested the Martian atmosphere in the 1970s.

They also study previously collected specimens to see if any should be reclassified. Of the 53,000 meteorites that we've officially cataloged on Earth, 104 have been labeled Martian [source: Marlow]. Eyewitnesses have only seen five of these rare rocks arrive on our planet. The rest made a quiet entry and were found after their impact, often in Antarctica or North Africa because they're easy to spot on ice or sand.

Over time, astronomers were able to identify more of these so-called Martian meteorites. And they began to seriously scrutinize them. In 1996, a team of NASA scientists shocked the world when they reported that they had found fossils of Martian bacteria in a meteorite known as ALH84001.

The ALH84001 meteorite, which was unearthed in the Allan Hills area of Antarctica in 1984, contained yellowish grains of carbonate, a common mineral that can have biologic origins. When the scientists studied the carbonate under an electron microscope, they saw rodlike structures that they said were fossilized bacteria cells. They also detected iron sulfides and magnetite, two compounds synthesized simultaneously by certain bacteria. The research team hypothesized that the bacteria formed on Mars and traveled to Earth as passengers aboard ALH84001.

Since then, several studies have shown that the chemical compounds in ALH84001 likely formed without the influence of any life processes and therefore don't prove the existence of Martian life. But the question has never been conclusively answered one way or the other. As a result, interest in Martian meteorites remains high, and scientists and rock hounds scour the globe to find new specimens.

They also study previously collected specimens to see if any should be reclassified. Of the 53,000 meteorites that we've officially cataloged on Earth, 104 have been labeled Martian [source: Marlow]. Eyewitnesses have only seen five of these rare rocks arrive on our planet. The rest made a quiet entry and were found after their impact, often in Antarctica or North Africa because they're easy to spot on ice or sand.

Martian meteorites are a hot topic today, but people have been dealing with them for years. Centuries, even. In 1815, an 8.8-pound (4-kilogram) meteorite streaked through the skies over France, creating a sonic boom. Scientists labeled it Chassigny, after the town where it was discovered, and took it into the lab to study its composition, which is rare and defines a class of Martian meteorites known as chassignites.

In 1865, 11 pounds (5 kilograms) of pure red-planet rock slammed down near Shergotty, India, scaring residents and defining the shergottite class of meteorites. And finally, in 1911, a barrage of 40 stones fell near Nakhla in Egypt. The nakhlites, which ranged in size from 0.71 ounces (20 grams) to 63.95 ounces (1,813 grams), left smoke trails and struck with booming detonations. According to some accounts, one fragment of the nakhlite meteorite hit and killed a dog.

From Mars to Earth, With Love 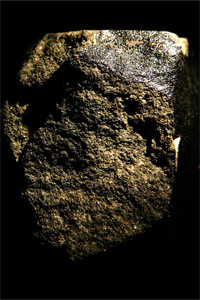 That's not just any rock. That's the Nahkla, a highly rare Martian meteorite, which fell to the Earth and landed in Egypt in 1911.
Cate Gillon/Getty Images

Finding and analyzing Martian meteorites on Earth is just one piece of the puzzle. Explaining how they got here is another. Today, scientists think they know how a typical Martian meteorite journeys to Earth. Here's what may (emphasis on the "may") have happened to ALH84001:

It doesn't require a lot of imagination to embellish this story. If water did indeed flow on Mars, perhaps the planet had an environment suitable to life. And if life developed on Mars, perhaps a few cells or spores hitched a ride on a blast-ejected rock. The question then becomes: Could living matter survive a long interplanetary journey, where cosmic rays wreak havoc on biological molecules such as proteins and nucleic acids?

A voyage of 15 million years, similar to the one ALH84001 took, most certainly would devastate any life clinging to the surface of a space rock. Even microbes nestled deep in the core of a meteorite would feel the penetrating effects of X-rays and gamma rays. But not all Martian meteorites take the slow boat to China (or Africa or Antarctica). Many arrive within a few years of being ejected from their original home. One out of every 10 million reaches Earth in less than a year [source: Warmflash].

So, it's not so far-fetched to think that life evolved first on Mars and then, by way of interplanetary seeding, on Earth. And recent evidence from other NASA missions is making the idea even more tantalizing. In 2008, the Phoenix Mars Lander surprised astronomers when it detected perchlorate in Martian soil. This prompted a team of scientists to add perchlorate to desert soil containing organic compounds and then analyze the sample using quick-heating techniques borrowed from the Viking missions. They learned that perchlorate, in the Viking tests, may have destroyed or masked important organic compounds linked to processes carried out by living things.

All of the questions remain, but one thing is clear: For astronomers studying Martian meteorites, it really is a wonderful life.

It's hard not to think about "Mission to Mars," Brian De Palma's flawed 2000 movie about the secret of life on Earth, when you hear about Martian meteorites. Remember what Jim McConnell (played by Gary Sinise) said when he learned the truth: "They're us. We're them."