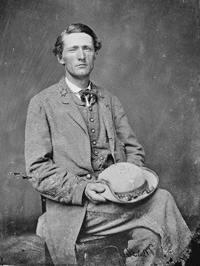 Confederate Colonel John Mosby is known as the most successful Ranger leader in the Civil War.
Photo Courtesy Library of Congress

The Army Rangers were heavily influenced by the American landscape and the people who populated it before the Europeans. The rough terrain and forests of the newly settled land were much more conducive to the ambushes and raids carried out by Native Americans in battle than the traditional pitched battles fought in open fields by European armies. To have any sort of chance in war against the Native Americans, European soldiers had to adopt the same guerrilla tactics.

This was what Captain Benjamin Church had in mind in 1670 when he assembled the first Ranger-like team in American history. Church created a band of men who conducted hunting parties to find and kill "King Philip," the English moniker given to the Wampanoag tribe chief, Metacomet. Church's scouts and raiders spent long periods of time "ranging" -- quietly covering distances in search of the enemy. This gave rise to the term "ranger." Church's Rangers used the Native Americans' own methods against them, conducting short, sporadic surprise battles and ambushes resulting from the information gathered during ranging [source: U.S. Army Ranger Association].

The man credited with establishing the first Ranger company is Major Robert Rogers. To help the British in their fight during the French and Indian War, Rogers assembled the first official Ranger group in the colonies in 1756. This regiment was made up of deer hunters who knew how to move swiftly and quietly through the woods and hills, how to track, and how to shoot precisely with the highly imprecise weaponry available at that time [source: U.S. Army Ranger Association].

Rogers expanded upon the knowledge these men already had, adapting it to the context of war and creating 28 operational rules that included advisements on ambushing, marching formations, prisoner interrogation, retreat, scouting and reconnaissance. These were documented in Rogers' now-famous Standing Orders for Rangers (more on that later), and 19 of the orders are in use for the 75th Ranger Regiment [source: SOC].

The most famous Ranger brigade of the war is arguably Colonel John Mosby's band of Confederate troops, who, according to Mosby's mode of operation, shared loot from Union Army camp raids with the local population. But it was Mosby's raids and guerrilla-style warfare that became the hallmark of Rangers. Mosby was very successful at striking the Union Army randomly, always catching them off guard.

Although they didn't make any formal appearance in the Spanish-American War or World War I, the Rangers were activated once again in World War II. In North Africa, Europe, and South Asia they fought, forming the basis for the modern Ranger Regiment in existence today. We'll learn more about that later, but first let's look at Rogers' Standing Orders for Rangers, the criteria for ranging.