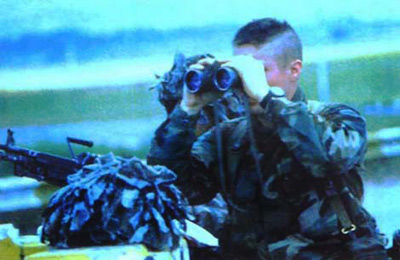 A Ranger stands at a roadblock during Operation Just Cause in Panama.
Photo courtesy U.S. Army

The bloody Allied invasion of Normandy, France, in World War II is considered to have been successful largely because of the actions taken by the Rangers. The invasion proved to be a particularly deadly one -- Allied troops suffered as many as 10,000 casualties in just a few days. The German positions were well-stationed, and machine gunners perched on the cliffs overlooking the sea had a vista of the entire beach.

It was here that the Rangers' motto was born. Aware that perhaps no one else could break through the German front, Brigadier General Norman Cota shouted to the 5th Battalion stationed on the beach, "Rangers, lead the way!" The Rangers did just that, penetrating the enemy beachhead -- their foothold along the shore -- and literally climbing the cliff walls to reach and capture the German machine-gun nests, leaving open just enough space for the larger forces to enter [source: SpecialOperations.com].

World War II also gave the Rangers some of their largest losses. In Cisterna, Italy, the Rangers broke through the Axis lines, only to have the front collapse behind them, blocking Allied forces from moving in and leaving the Rangers trapped. Almost three battalions were lost in that battle, and it was after this that the Rangers absorbed the 5307th composite force, nicknamed Merrill's Marauders -- the group that had recaptured Burma Road from the Japanese -- to replenish the ranks [source: SpecialOperations.com].

In the Philippines during World War II, Rangers led by Colonel Mucci executed a raid on a Japanese prison camp that held Allied prisoners of war. These prisoners were scheduled for death once the Japanese no longer had use for the camp. Mucci, along with his Rangers and Filipino guerrillas, attacked the prison camp, freeing 500 prisoners of war, killing 200 Japanese soldiers and fleeing into the jungle, carrying some POWs on their backs for as long as two days [source: SpecialOperations.com].

Rangers have also contributed to peacetime missions, like in Grenada during Operation Urgent Fury in 1983. After an airborne insertion, Rangers converged on a medical facility where Americans were trapped by the violent uprising within the Caribbean island nation. Rangers rescued the Americans and helped quell the uprising. The mission was declared a success and, as a result, the next year the 3rd Battalion was formed [source: GlobalSecurity.org].

The Rangers' presence was also noted in Panama in 1989. All three of the Ranger battalions fought together during the invasion of the Central American country to remove the dictator, General Manuel Noriega. As part of Operation Just Cause, Rangers took airfields and airports -- in true Ranger fashion -- and engaged the Panamanian Defense Force in firefights [source: GlobalSecurity.org].

The Rangers have also survived defeats. Operation Eagle Claw --  the 1980 special operations mission tasked with releasing 66 American hostages in the embassy in Tehran, Iran, -- failed and left eight of the force dead. And in Somalia, during Operation Restore Hope, the special operations force, of which the Rangers were part, suffered 18 deaths in as many hours [source: SpecialOperations.com]. The firefight that took place is recounted in the book and film, "Blackhawk Down."

Despite their losses, the Rangers have always had a big impact with minimal numbers. In World War II, for example, out of the 15 million Allied troops, only 3,000 were Army Rangers [source: World War II Army Rangers].

For lots more information on Rangers and related articles, check out the links and below.