Signing Up and Training

­Enlisted Soldier
The bulk of all soldiers (roughly 84 percent) are enlisted, usually through a local recruiting office. United States citizens between the ages of 17 and 34 years old with a high school diploma (or the equivalent) and good physical health and fitness are eligible for enlistment. They must also receive such as a minimum 31 score on the Armed Services Vocational Aptitude Battery (ASVAB) test. To learn more about requirements, check out Web site or speak to a recruiter.

Commissioned Officer Commissioned officers are the top-ranking leaders in the Army. There are several paths to becoming a commissioned officer. You can join ROTC, or Reserve Officers' Training Corps. ROTC is a set of leadership courses than are taken in conjunction with regular college courses. Graduation from the ROTC program earns the soldier the rank of Second Lieutenant. Students can also attend West Point, an elite military academy with stringent entrance requirements and a very rigorous training and learning program. Graduating from West Point is a prestigious honor. 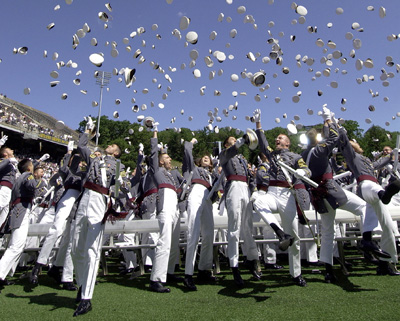 Photo courtesy U.S. Army
Cadets toss their caps into the air at the conclusion of their graduation ceremony at the United States Military Academy at West Point, New York.

Potential soldiers with college degrees between the ages of 19 and 28 can attend Officer Candidate School, an intense 14-week training program at Fort Benning, Georgia. Officer Candidate School leads to service as an officer for a three-year minimum in the regular army, or six years in the reserves. Civilians with professional degrees may be eligible for a commissioned rank based on their levels of skill and experience.

All Army recruits except West Point cadets (who go through a longer, even more grueling training program) experience basic training, a nine-week program that hones a soldier's mental and physical abilities and teaches them how to function within the Army. Recruits learn to respect and obey higher ranking soldiers, built their endurance through obstacle courses and long runs in heavy gear, learn to maintain and fire military weapons and learn Army basics lik­e map reading and First Aid. Basic training is run by drill sergeants, specially-trained NCOs who motivate and teach recruits. No one would describe basic training as "fun," but most soldiers are proud to have gone through the experience. The fact that almost everyone in the Army has experienced basic training also serves to forge a bond between soldiers. 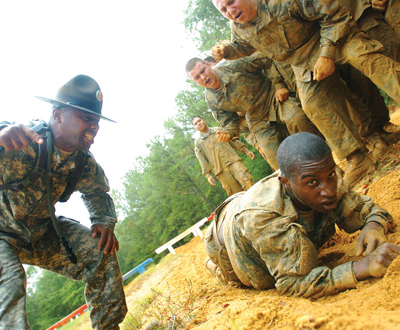 ­After basic training, soldiers move on to Advanced Individual Training (AIT). Here soldiers choose their career paths in the Army. Options include Infantry School, Engineer School, Field Artillery Center and Military Police School. A complete list of the AIT schools can be found here at the GoArmy.com.

We'll look at some basics of life in the Army next.