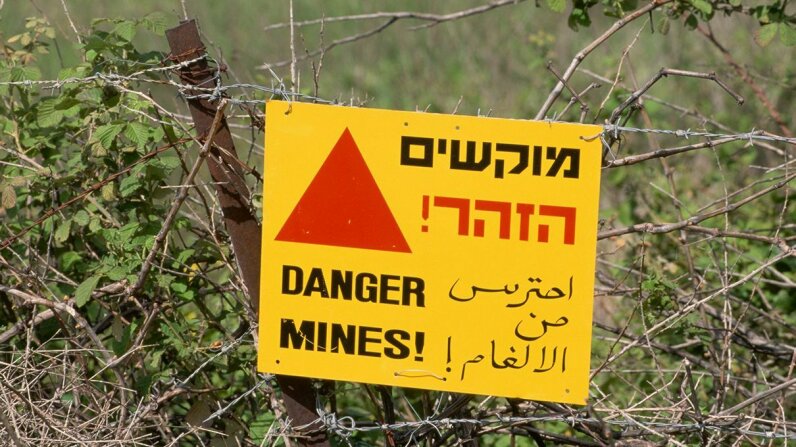 In the Golan Heights, a sign written in English, Hebrew, and Arabic warns of land mines. Richard T. Nowitz/Getty Images

Landmines are inexpensive to make, simple to deploy and gruesomely effective — and there are still more than 100 million lurking underground in former conflict zones around the world, according to Landmine & Cluster Munitions Monitor. And each year, as many as 20,000 people are killed or injured by landmines, adding to the half-million people who have already been affected.

The solution is deceptively simple: Find and dig up the landmines.

Unfortunately, landmine hunters are faced with outdated, dangerous methods that haven't changed much since World War II. For the most part, detecting landmines means walking into landmine fields and using a metal detector to locate the firing pin and dig up the device.

It's not that scientists haven't explored other methods for finding landmines. They've tracked elephants who seem to be able to detect landmines by smell. They've sent up drones to map mine fields, and used robots to the detonate mines. These methods, although novel, have turned out to be less effective than experts originally hoped.

According to a new article in the journal Nature Biotechnology, researchers from the Hebrew University of Jerusalem (HUJ) are using genetically engineered Escherichia coli bacteria to remotely map buried landmines and other unexploded devices. It turns out that all landmines leak explosive vapors that build up in the soil directly above the devices, so researchers engineered bacteria to give off a fluorescent signal when they find these vapors.

The bacteria are placed inside tiny polymeric beads that drones then scatter across minefields. When they encounter the landmines' emissions, the bacteria begin to fluoresce, and then researchers can use a laser-based system to map the terrain and identify danger.

These luminous beads are filled with bacteria that react with light when they come in contact with gases emitted by buried landmines.
Hebrew University

Although the bacteria's initial performance has been promising, lead researcher Professor Shimshon Belkin of HUJ's Alexander Silberman Institute of Life Sciences says in a press release several obstacles remain before the bacteria will provide a practical solution. Some of the issues include "enhancing the sensitivity and stability of the sensor bacteria and improving scanning speeds over large areas."

And, even when the bacteria find a landmine and light up like a disco ball, there's still the problem of safe detonation. Hopefully, we can leave that to the robots.

Now That's Interesting
When it comes to destroying landmines,a robot can only perform that task once, in the process blowing itself to smithereens. Unfortunately, specially trained people remain the most effective way to disarm a landmine.