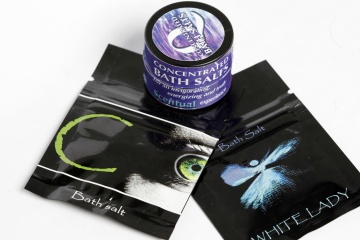 Studio shots of C Original, TranQuility and White Lady, all of which are bath salts and apparently being used by some to get high.
© Mills, Andy/Star Ledger/Corbis

In late 2010, police blotters across the United States began reporting cases of drug-related behavior disturbingly reminiscent of the 1970s PCP craze. Users arrived in emergency rooms agitated, violent and delusional. Some required a mob of medical workers and a slew of sedatives to bring them under control. Once treated, the worst cases were admitted to psychiatric care, having apparently suffered a psychotic break [source: Goodnough and Zezima].

Thus did a new drug, popular with club kids and ravers, announce itself to the world. Nicknamed "bath salts" after its colorful, crystalline and powdered appearance, its effects were far from soothing. Moreover, for a time, this designer drug was perfectly legal and widely available.

To give you some idea of bath salts' fearful reputation, consider this: When Miami police confronted a naked Rudy Eugene as he chewed the face of a 65-year-old homeless man, they initially assumed the 31-year-old attacker -- who bystanders described as zombielike and growling like an animal, and who required several shots to put down -- was on bath salts. In truth, the only drug in Eugene's system was marijuana [sources: CNN; Haiken; Hiaasen and Green].

The police had seen a recent uptick in drug-related attacks, including two cases of users removing their clothes. In one case, it took 15 officers to detain the suspect, who had previously shrugged off Taser fire. Both cases involved LSD mixed, it was believed, with another drug or drugs. Bath salts seemed the likely culprit, but no clear connection existed linking the substance to the incidents [sources: AP; CNN; Hiaasen and Green].

So dreadful was bath salts' reputation that it quickly became the proverbial "usual suspect" in drug cases involving psychotic episodes, hallucinations, extreme delusions, combative behavior and high pain thresholds. News reports supported the assumption: According to a New York Times article, an Indiana man on bath salts hurled himself into traffic after scaling a roadside flagpole; a man in Pennsylvania stabbed a priest after forcing his way into a monastery; and a woman in West Virginia, convinced something was under her skin, shredded her flesh with her fingernails over several days [source: Goodnough and Zezima].

What are bath salts, and what do they in fact do? With this boogeyman of drugs, it can be difficult to separate fact from fiction. In part, this is because bath salts, like other substances in the growing synthetic drug scene, exist in several formulations. They sometimes come packed with "extras" like high doses of caffeine, and manufacturers often mix them with other drugs, with unpredictable consequences [sources: AP; Hiaasen and Green; Rahman].