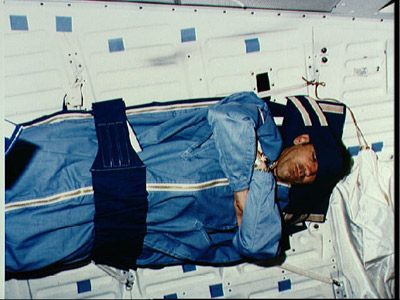 In addition to using the bathroom regularly, astronauts need to do all of the same things they do on Earth, including eating and sleeping. Of course in space, the lack of gravity makes everyday activities not so ordinary.

With no refrigerator on-board the spacecraft to keep food fresh (although the International Space Station now has fridges), most food is dehydrated and sealed in bags to prevent bacteria and other organisms from growing. The astronauts add water to the food to soften it enough to eat. Some foods are avoided entirely because even though they are perfectly innocuous on Earth, they can be downright dangerous in space. Crumbs, for example, can float into an astronaut's nose and get inhaled. Hot food can cause nasty burns if it floats onto exposed skin.

Since astronauts themselves can float away while they eat, they first attach themselves to a table with special restraints. They also need to be tethered while they sleep. The sleeping area usually consists of bunks with sleeping bags attached to a wall.

Astronauts can get pretty smelly in their space suits. Because they're in such close quarters, the aroma can become unpleasant to say the least. When they need to bathe, astronauts usually take sponge baths, which are easier to take than showers. They use a wet, soapy washcloth to wash themselves and then "rinse" with a wet washcloth.

Some spacecraft do come equipped with a special "shower" of sorts. It is made of a plastic cylinder that measures about three feet around. The shower is completely enclosed by a sleeve that reaches from the floor to the ceiling to prevent water from floating away. The astronauts spray themselves with water from a nozzle to rinse off and use a vacuum hose attachment to suck up all the water from their skin and from around the shower itself.

To learn more about going to the bathroom in space, space suits and toilets, look over the links below.

One female astronaut took her space training to a whole new level. In 2007, NASA astronaut Lisa Marie Nowak drove from Houston to Orlando International Airport to confront Colleen Shipman, a rival for the affections of fellow astronaut, Navy Commander William Oefelien. Nowak reportedly was able to make the drive without stopping because she was wearing an adult diaper.