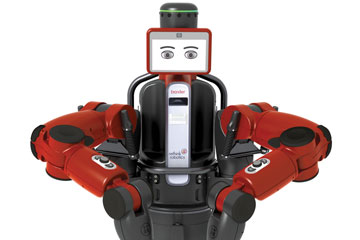 Baxter’s expressions let nearby workers know what’s going on with the robot’s processes, from stand-by to concentration to a sad resignation when a task isn’t going well.
Image courtesy of Rethink Robotics

Baxter is a somewhat humanoid robot, but it wasn't made this way just for the sake of appealing to humans. All its parts serve a purpose. It has a computer screen head somewhat reminiscent of a tablet, on which animated cartoony eyes and eyebrows change expression to convey intuitive messages to nearby workers. These expressions include closed eyes when it is on stand-by; neutrality when it is ready to start learning (eyes wide open and eyebrows parallel to eyes), concentration when its in the middle of learning (eyes wide open and eyebrows slanted down toward the center), focus when it is working without any issues (eyes looking downward and eyebrows slanted down toward the center), surprise when a person comes nearby (wide eyes with dilated pupils, eyebrows raised and an orange screen background), confusion when it's having an issue with a task (wide eyes with one eyebrow inverted and both slanted downward toward the outside) and sadness when there is a problem and it has given up trying to work on a task (eyes looking downward with both eyes and with eyebrows inverted and slanted down toward the outside). Baxter's eyes also move in the direction one of its arms is about to move as a warning to anyone working nearby.

On its torso, two arms are mounted that measure 41 inches (104 centimeters) from shoulder to end-effector plate, an area with interchangeable end-effectors, or "hands," that serve various purposes. Baxter comes with two hand types: a vacuum cup and an electric parallel gripper with something like fingers. The cups and fingers can also be swapped out for others, and it is expected that third parties will develop new types of end-effectors. Each arm has seven degrees of freedom, and they can work in tandem or independently of one another, depending upon need. This means you can do things like put Baxter in between two conveyor belts and have it work both. The arms are also compliant, a robotics term meaning that rather than being completely rigid and unable to change course, they can sense and adjust to any obstacles they encounter. If you grab, push or bump into one of its arms, it will give rather than remaining fixed. This compliance is made possible by using series elastic actuators, in which a motor and gearbox control a spring that drives the joints, rather than directly controlling the joints. It's the springs that make each arm less rigid than typical robot arms, and they are also used to measure forces acting on the arms.

Baxter's ability to sense when it comes into contact with something comes in handy for safety reasons. Baxter also has a 360-degree sonar sensor and five cameras. Its software was designed to use these hardware devices so that Baxter can, in effect, feel and see things in its surrounding area and adjust its actions accordingly. When it senses that someone has come close, Baxter displays a surprised expression and slows its movement. When it unexpectedly bumps into something or someone, it stops moving entirely. And if the power is cut for any reason, Baxter's arms slowly relax. Its arms also have back-drivable motors, padded coverings and a lack of pinch points for added safety. There is also an emergency stop button, just in case. And the cameras aren't just for safety. They allow Baxter to detect objects that it needs to manipulate in its work area.

Like many of its robot brethren, Baxter doesn't have legs, so it can't get around on its own. It can either be mounted to one spot or can be placed on an optional wheeled pedestal and rolled wherever it's needed. Baxter stands 37 inches (94 centimeters) tall without the pedestal, and with it, between 70 inches (178 centimeters) and 75 inches (191 centimeters) in height. Its weight is comparable to a human at 165 pounds (75 kilograms) without the pedestal. The pedestal adds 141 pounds (64 kilograms).

Baxter also has input and output (I/O) connections that include an Ethernet jack, a USB type A port and a 15-pin D-sub with PLC-compliant connections for interfacing with other devices. You can plug the robot into the typical 120-volt outlet.

The Robotic Creations of Rodney Brooks

Rodney Brooks has been working diligently in the field of robotics for quite some time, and Baxter is far from his first 'bot. Here are a few of the robots that he's developed over the years, along with his students and coworkers at MIT and in private industry: