What Can Baxter Do? 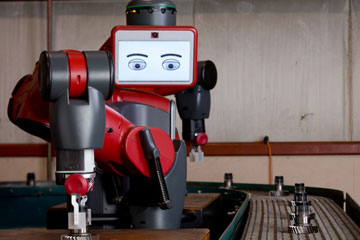 Baxter will happily work for hours without needing a bathroom break.
Image courtesy of Rethink Robotics

In terms of operational capacity, Baxter has a maximum payload of around 5 pounds (2.3 kilograms) and a speed of 2 to 3.3 feet per second (0.6 to 1 meter per second), depending upon payload. It can perform up to 12 pick-and-place operations per minute using both arms. Baxter is rated to operate in temperatures from 32 to 104 degrees Fahrenheit (0 to 40 degrees Celsius).

Baxter was designed to handle a variety of repetitive tasks normally performed by humans on a factory floor. According to Rethink, these tasks include:

To train Baxter, a person physically moves its arms and uses navigator buttons on the arms to make selections from the screen. Say you wanted to program it to pick up and place objects. You would first grab the robot's wrist to let it know it's engaging in training. Then, you would position its end-effector over the item. A camera will center on the item and display it to the screen. You click to confirm that it is the item you wish Baxter to pick up. After Baxter picks it up, you position its arm over the destination, and click to confirm. If the destination is a box, Baxter will pick up the item and place it in the box. Once the training is finished, Baxter will continuously grab and place items based on your prior instructions as long as there are objects for it to grab. Baxter can adjust to item position and orientation changes to a point, so as long as the items stay in the same relative area (for instance, while they are coming down a conveyor belt), Baxter should be OK. If it runs into trouble, its facial expression will change accordingly and a human can intervene.

Baxter has quite a bit of basic built-in functionality now, but there are plans to release regular software updates to improve Baxter's capabilities. The robot's software is based on ROS (Robot Operating System), an open source BSD Unix-based OS which includes a specialized set of drivers, libraries and other tools specifically for programming robots, and OpenCV (Open Source Computer Vision Library), a software library that includes computer vision and machine learning algorithms. A software development kit (SDK) is being released by Rethink sometime in 2013 to allow for future development of more complex capabilities via third-party programming by companies and robot enthusiasts alike. Baxter was designed to be an extensible platform with lots of room for future improvement through hardware and software add-ons.