Is Baxter likely to put humans out of work? 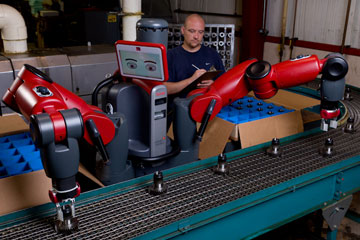 Lots of our literature reflects our fear that robots will go berserk and kill or enslave us. That's unlikely with workbots like Baxter, which have lots of functionality but lack sentience. Baxter can't "think" for itself. But a more rational fear is that they will put people out of work. Distrust of automation as a bringer of unemployment is not new and has resulted in protest throughout the machine age. One such protest occurred with the introduction of the mechanical loom in France in the late 1700s, which you may have heard about in the movie "Star Trek VI." Textile workers, afraid for their jobs, threw their wooden sabots (shoes) into the looms to stop them, giving us the word sabotage.

Machines have, indeed, taken over many jobs formerly performed by humans. In the 1800s, most jobs were agrarian, but the Industrial Revolution ushered in new technology, and we began mass-producing goods, and even farming, with machinery and automation. Over time, this completely transformed the jobs that most people do, moving us away from farms and into factories and offices.

It wasn't always good news, as sometimes these innovations have caused unemployment, like in coal mining communities that were driven into poverty. They also led a lot of people out of the fresh air and into grueling low-paying factory jobs. But better paying and less physically demanding jobs have also cropped up as a result of mechanization, like those of the technicians needed to operate, program and maintain the machines. Eighty percent of the work in automotive plants is now automated, and this change has made the work less backbreaking and more satisfying than before for remaining car factory workers.

Without machine automation, we wouldn't have been able to mass-produce the tiny parts that have brought us into our modern age of advanced technology. We certainly wouldn't have been able to make the increasingly small and powerful microchips that run our computers, another invention that has greatly changed the employment landscape. Many of us now do things like pay our bills, file our taxes and buy plane tickets via computer, reducing the need for us to deal directly with postal, tax and travel professionals, to name a few. As we begin to handle chores that used to take more human interaction with button clicks, jobs will shift. And there is no end to the things that can be automated. There is even software that writes sports and stock articles for professional news organizations. Full articles like this one could be next.

Baxter could displace some factory line workers. With its current capabilities, Rethink has estimated that Baxter can handle the simple materials handling jobs held by about 800,000 people in the U.S. [source: Freedman (Inc)]. The low price means that the cost of a human worker can be made up in a year or so. Plus, Baxter can work non-stop for longer periods of time. But robots may just shift what jobs people do away from the most menial assembly line tasks into better jobs, like training and maintaining the robots. And there are many tasks that require more thought than Baxter can muster. Robot line workers will also be good for positions that it's hard to find humans to fill, like late shifts, or jobs that cause repetitive stress injuries or expose people to noxious fumes or other dangerous conditions.

Low-cost industrial robots could also reinvigorate the U.S. manufacturing field by being cost-effective enough to compete with lower wage workers overseas, which could lead to more local factories and less outsourcing. The United States actually lost jobs when it was slower to automate than countries like Japan, as was the case with the automotive and electronics industries in the '60s and '70s. It could be that if U.S. manufacturers don't adopt more industrial robots, companies in other countries will do so and gain or retain the ability to produce things more cheaply. Increased access to inexpensive robotics could both free workers from physical drudgery and allow more companies to effectively compete in today's global economy.

Further, we probably shouldn't hold back progress for jobs that won't always be necessary. Computers and robots have led to the ability to perform calculations and tasks with more speed and precision than any human ever could achieve before, which has led to still more innovation. We can do things like search the Internet instantaneously for information stored on the other side of the planet, and lob exploration robots at Mars and monitor the data they send back. The presence of more and more functional robots could lead to innovations that aren't even occurring to us right now.