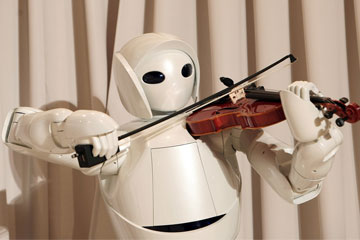 Toyota unveiled a violin-playing robot in 2007 in Tokyo, but artists probably don’t need to fear for their jobs. The performance was designed to showcase the precision of movement the robot is capable of.
©Koichi Kamoshida/Getty Images

In the 1980s there were only a few thousand industrial robots in operation in the U.S. [source: Condon]. Now there are hundreds of thousands, and more than a million worldwide. Many of them are working in the automotive industry, moving, cutting, drilling, welding, painting and otherwise assembling our cars, but they are also employed in pretty much every other industry. With its ease of use and low price point, Baxter might do for industrial robotics what Roomba did for in-home robotics and increase the numbers still further.

Baxter is being aimed at the nearly 270,000 small to midsize manufacturers, which have five hundred or fewer employees [source: Freedman (Inc)]. Companies of that size are unlikely to be able to invest hundreds of thousands of dollars into robots that require a redesign of their workspace and IT personnel to run them, but Baxtermight be within their reach. And with such companies, the robot's initial reception has been good. Nypro, an injection-molding firm, and Vanguard Plastics have test-driven Baxter and expressed interest in putting it to work in their plants. And larger companies could also consider it for cost-effectively automating tasks they are currently doing manually.

Baxter isn't the only game in town, although he's likely the least expensive. There are a few other robotics companies trying to get into similar markets. The Nextage robot by Kawada Industries is a two-armed humanoid assembly robot that can work alongside humans like Baxter. It's more precise, but costs nearly $100,000 [source: Toto]. Barrett Technology has a compliant arm with seven degrees of freedom, and back-drivable and force-sensing capabilities, also for around $100,000. Universal Robot has human-safe and easily programmable robot arms for around 20,000 Euros (roughly $27,000) that can do heavier lifting than Baxter. Yaskawa Electric Corp's dual-armed Motoman robot has been demonstrated dealing blackjack. And Fanuc Corp and ABB Ltd, makers of heavy industrial robots, are reportedly working on smaller models [source: Guizzo and Ackerman]. So, there will be lots of choices to get more robots into businesses working right alongside humans in the near future.

Provided we can work out the socio-economic issues so that we all stay gainfully employed, this new technological revolution will allow us to come up with new and creative things for ourselves and our robot co-workers to do. If robots can take over more undesirable or difficult tasks, the sky's the limit for human achievement. Many of us can shift away from mindless production to knowledge work. Robots are even making forays into non-industrial areas like assisting with surgery, X-ray scanning, bomb detection and search and-rescue work. As their uses increase, so will demand. Perhaps there are future jobs to be had by us all in the field of robotics itself.

Robots are cool and I'll never tire of reading about them. I may even make one someday. I have an old LEGO Mindstorms kit that's been gathering dust, and a couple of new Raspberry Pi computers. I just need to set aside some time and drain my bank account on a few more items (like robotics books) before getting started.

One jarring revelation from my research, however, was that a software application that writes articles exists. It hadn't occurred to me that we were already at the point when a program could generate a readable story. If it progresses beyond sports and stock write-ups, I may soon know what it feels like to be automated out of a job.

My other vocation, computer programming, may not be safe, either, if the user-friendly programmability of robots like Baxter catches on in other areas. Maybe fiction writing, my other-other vocation, will be harder for an artificial intelligence to emulate. But it's also more difficult to turn into a paying gig. We may need to switch from capitalism to some form of utopia for this all to work out.

Still, I'm all for technological progress, and especially for the removal of drudgery from work via robotics. There are much better ways we can spend our time. Like exercising to prevent our newfound lack of activity from turning us into doughy layabouts, or studying up for those impending career changes.