Dipper, Big and Little, two groups of stars of the northern part of the sky, so called because of their resemblance to the outline of water dippers. The seven stars of the Big Dipper are part of the constellation Ursa Major (Big Bear). The Little Dipper consists of the seven principal stars of the constellation Ursa Minor (Little Bear). In mid-northern latitudes both dippers are visible any hour of the night, all year round. They appear to circle daily around the North Star (Polaris), which forms the last star in the handle of the Little Dipper. A line joining the last two stars of the bowl of the Big Dipper points to Polaris. For this reason, these two stars are known as Pointers. 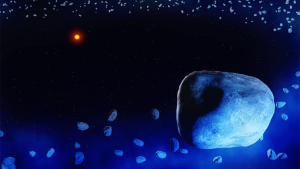