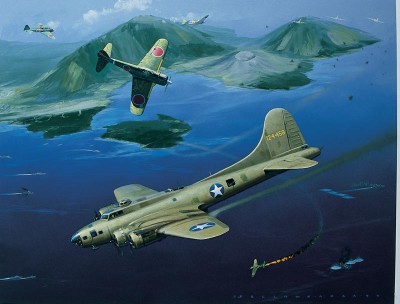 Although most closely associated with European operations, the Boeing B-17 also flew in the Pacific. The plane was See more classic airplane pictures.
s

The four-engine Boeing B-17 Flying Fortress was arguably the most famous and almost certainly the best-loved bomber of World War II.

Curiously, the brilliant Boeing conception, first flown on July 28, 1935, was almost stifled by an agonizingly long gestation period that did not see the first production aircraft fly until June 27, 1939. Despite the airplane's demonstrated superiority over all its twin-engine competitors, the penny-pinching American Congress had been unwilling to authorize the plane's purchase in quantity until war seemed certain.

The basic elements of the cantilever, all-metal monoplane design of the Boeing B-17 dated all the way back to the Boeing Monomail of 1930. These design elements were successively developed through the B-9 "Death Angel" twin engine bomber and the revolutionary Model 247 transport. The big advance in the Boeing B-17 was the employment of four engines at a time when the words "multi-engine" in a specification meant "twin-engine."

Boeing B-17s based in Europe flew mainly from bases in England. When the bombers were scheduled to return to base following a run, officers and others would gather outside to wait and count.
m

The Boeing B-17C entered combat with the RAF, but was considered unsuccessful. A later version, the Boeing B-17D, entered the Pacific War on December 7, 1941. There followed a continuing succession of improved models: the B-17E, F, and G. Ultimately, 12,731 examples were built by Boeing, Lockheed (Vega), and Douglas.

The Boeing B-17 was legendary for its ability to return to base after sustaining damage that would have doomed a lesser aircraft. This badly mauled B-17 was photographed over Tunisia as it headed home with an almost-severed tail section.
g

The Boeing B-17 spearheaded the USAAF's doctrine that formations of heavily armed bombers could fight their way through enemy fighters and carry out their missions. The Boeing B-17 proved that this was so -- but only at terrible cost in air battles, such as those over Schweinfurt and Regensburg, Germany. Fortunately, long-range fighters soon became available to escort the big, slow bombers to and from targets.

Ground crews were the unsung heroes of the Boeing B-17 story. These men kept the big bombers flying, even in the face of inadequate replacement parts and punishing flight schedules.
n

A delightful airplane to fly, the Boeing B-17 won the hearts of its crews by its ability to absorb tremendous punishment and return home. The Fort fought brilliantly in every theater, then soldiered on long after the war in various support roles, such as air/sea rescue and reconnaissance.