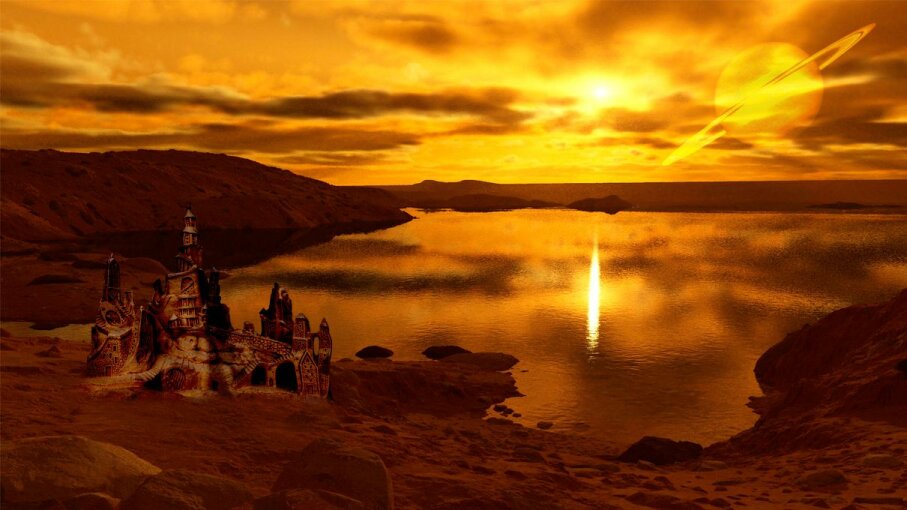 Scientists think that the particles on Titan may be able to generate some serious electrostatic force, allowing them to clump together, stand tall and defy gravity. NASA/Stocktrek/Gail Shumway/Getty

Titan probably isn't the first place that comes to mind as a great spot to build sand castles. After all, Saturn's largest moon has a toxic, nitrogen-rich, super-dense atmosphere that would choke you before you have a chance to unpack your bucket and spade. But it turns out that the tiny particles that blow around on the moon's surface have some interesting qualities that would make the most skilled sand sculptors green with envy.

On Earth, sand castles require two ingredients: sand and water. At just the right mix, when formed into a carefully crafted castle on the beach, the water helps to bind together the individual sand grains, maintaining the structure's shape. Of course, as the sun dries out your beach fortress, the individual bonds among grains are lost, the sand blows away and gravity causes the castle to slump into a sorry-looking pile. That is, if the incoming tide doesn't wash it away first.

The situation is very different on Titan, however.

We know that thanks to some new research led by the Georgia Institute of Technology (Georgia Tech) that focused on wind-blown Titan sand. The team published their findings in the journal Nature Geoscience. Essentially, the scientists recreated their own little bit of Titan atmosphere inside a sealed cylinder. Specifically, they investigated what would happen if tiny grains made out of the toxic carbon- and hydrogen-rich compounds (hydrocarbons known as naphthalene and biphenyl) found at the moon's surface were rotated for 20 minutes in a dry, pure nitrogen environment.

When they opened the cylinder at the end of the experiment, they measured the electrical properties of the tiny grains, and that's when they made their "awesome sand castle material" discovery.

"If you grabbed piles of grains and built a sand castle on Titan, it would perhaps stay together for weeks due to their electrostatic properties," said Josef Dufek, a co-investigator on the Georgia Tech study, in a statement. "Any spacecraft that lands in regions of granular material on Titan is going to have a tough time staying clean. Think of putting a cat in a box of packing peanuts."

As the toxic particles tumbled in the experiment, they collided regularly and exchanged electrons. Over time, the accumulation of electrons – which builds up electrostatic charge – became so great that the individual particles stuck to any surface and bonded extremely efficiently to one another. Indeed, some of the grains became stuck to the cylinder and refused to fall out.

This simulates what scientists think is going on at Titan's surface. When surface winds blow at speeds of over 15 miles per hour (24 kilometers), small particles get picked up and bounce across the surface. As these bouncing particles collide with other particles, they get charged up, eventually having so much electrostatic charge that they stick to other particles and clump. As the clumps grow, they get stuck and resist all but the strongest gusts of wind.

As Titan experiences one-seventh of the gravity we experience on Earth, the electrostatic force in any structures composed of these particles — like dunes or sand castles — overcomes the force of gravity, and they refuse to slump for very long periods.

Titan, like Mars, is known for its dune fields — vast undulating landscapes of wind-blown material. However, there's been a mystery on Titan that doesn't afflict Mars' dunes. NASA's Cassini spacecraft has taken measurements of Titan's dune fields and revealed that although the prevailing winds blow from east to west, dunes as high as 300 feet (91 meters) seem to build up in the opposite direction, likely formed by gusts of very strong "rogue" winds that occasionally blow in the opposite direction. This would be impossible for Mars' or Earth's dunes that are composed of silicate sand particles, where they are shaped by the prevailing winds.

Titan is like Earth in many ways. The moon supports a thick atmosphere, and it even has large lakes of liquid. But these large lakes are not composed of liquid water. Titan's cold atmosphere means other volatile chemicals, like methane and ethane, exist as a liquid, whereas in Earth's temperate environment they are naturally found as a gas.

The methane in Titan's atmosphere has a similar cycle to water on Earth; it evaporates into the atmosphere from the large lakes, condenses as clouds and falls as methane rain on Titan's hydrocarbon-rich landscape, creating rivers and sculpting valleys.

This strange atmosphere gives rise to compounds known as tholins, which are thought to cover the surface of Titan. Scientists think comets delivered these same carbon-rich molecules to early Earth and that they ultimately became the building blocks for all life. Therefore, astrobiologists often consider this atmospheric moon to represent a young Earth, before life was sparked.

Though there are certainly similarities with Earth, as this study proves, some of the dynamics on the surface of Saturn's largest moon are very alien — even if the sandcastle-building environment is thought to be the best in the solar system.

"Titan's extreme physical environment requires scientists to think differently about what we've learned of Earth's granular dynamics," concluded Dufek. "Landforms are influenced by forces that aren't intuitive to us because those forces aren't so important on Earth. Titan is a strange, electrostatically sticky world."

Now That's Interesting
The tallest sand castle in the world stands at 14.84 meters, or 48.69 feet, and was made by Sudarsan Pattnaik in India, according to Guinness World Records.